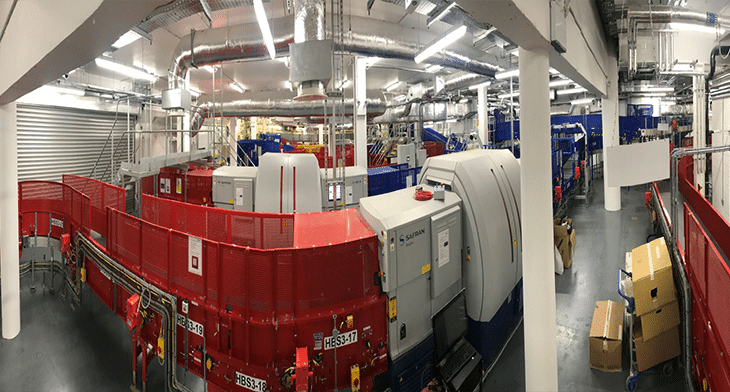 Bristol Airport has completed the installation of an £18.7 million baggage screening facility.

The state-of-the-art facility was part of a UK-wide requirement set by the European Commission and the Department of Transport for the integration of ‘Standard 3’ technologies in baggage screening equipment by September 2018.

Bristol Airport was one of the first airports to meet the deadline and since installing the equipment has screened 1.5 million bags.

Describing it as a “hugely challenging and complex project”, Fraser Drury, head of engineering added: “We are delighted that Bristol Airport met the deadline for upgrading hold baggage screening to Standard 3. Over the past three years we have redesigned our Hold Baggage System, installing six Standard 3 x-ray machines and around 200 new conveyors.”

He also said that although the technology is invisible to passengers, it makes a “massive difference to our ability to screen baggage safely and efficiently,” therefore enhancing the overall passenger experience.

Jason Clark has joined as CFO, bringing strong board level experience in finance positions, most recently as CFO for Condor Ferries, one of the main ferry operators between the UK, France and the Channel Islands.

Meanwhile following the announcement that Paul Davies, Bristol Airport’s long-serving operations director, will retire at the end of this year, Graeme Gamble has been appointed as COO. He will join the airport in January 2019 from NATS, the air navigation services provider, where he is currently responsible for air traffic control services at seven UK airports.

Finally, Debbie Hartshom, who came to the airport in May 2017, has been promoted to the position of People Director.

Dave Lees, CEO at Bristol Airport said: “These appointments complete a strong leadership team with the right mix of skills to steer the organisation through an exciting period of growth. Jason, Graeme and Debbie bring a wealth of experience from inside and outside the aviation sector which will help us achieve our ambition to make Bristol Airport the first choice for air travel to and from the South West of the UK.”

The airport is in the midst of preparing a new Master Plan, which will set out potential development required to handle up to 20 million passengers per annum from the existing runway by the mid-2040s. It is expecting to serve around 8.5 million passengers this year.