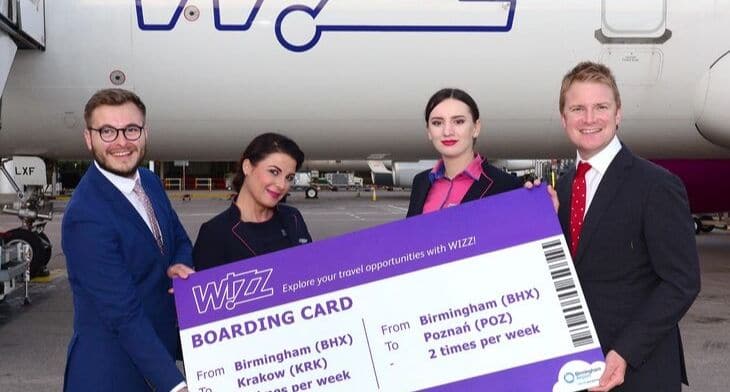 ‘Wizzing’ off to Poland from Birmingham

Birmingham Airport in the UK has launched two routes with Wizz Air this week. The low-cost carrier will be serving two routes – a new link with Krakow and it will reinstate its popular Poznan route.

The fifth largest city in Poland, Poznan has been welcomed back due to demand. the addition of the two new routes complements the existing routes served by Wizz Air to: Bydgoszcz, Gdansk, Katowice, Warsaw Chopin and Modlin airports, plus Wroclaw.

“These new services provide vital connections for friends and family as well as enabling travel to exciting city break destinations! We are grateful to Wizz Air for their continued commitment to Birmingham Airport and the Midlands,” said Tom Screen, aviation director at Birmingham Airport.

Commenting on how the airline will now be operating seven routes from Birmingham Airport, Tamara Vallois, Wizz Air’s head of marketing and communications added: “We launched our very first Wizz flight to Birmingham in 2015 and today, we offer seven low-fare routes to Poland, Romania and Hungary. We hope to see many happy customers on board our brand-new Airbus aircraft on routes to Poznan and Krakow as well as on all the other routes in the Wizz network.”