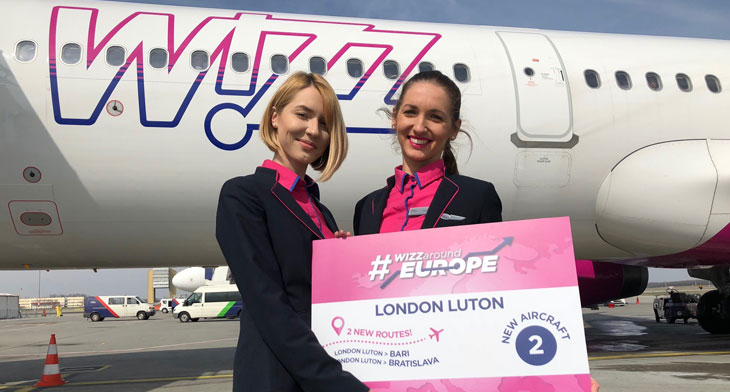 Wizz Air has celebrated the arrival of two new Airbus aircraft at its London Luton base and the launch of two new routes.

On 25 March, the first flights took off from London Luton to two new destinations in the airline’s growing network out of the UK.

Wizz Air said the addition of the new Airbus A320 and A321 aircraft to the London Luton fleet reflects the airline’s continued investment in its UK operations. The airline now has three aircraft based at London Luton, with a further five to be deployed by June 2018, increasing the number of direct local jobs to over 300.

“This is an exciting time for Wizz Air and its customers as we continue to expand our network across Europe. Our UK customers now have the opportunity to explore the fascinating cities and surrounding regions of Bratislava and Bari at Wizz Air’s lowest fares and travelling on one of Europe’s youngest aircraft fleets,” said Owain Jones, chief corporate officer at Wizz Air.

Jones continued: “The arrival of two brand new aircraft at London Luton reflects our commitment to our UK operations as we continue on our mission to deliver the lowest fares to some of the most exciting destinations Europe has to offer.”