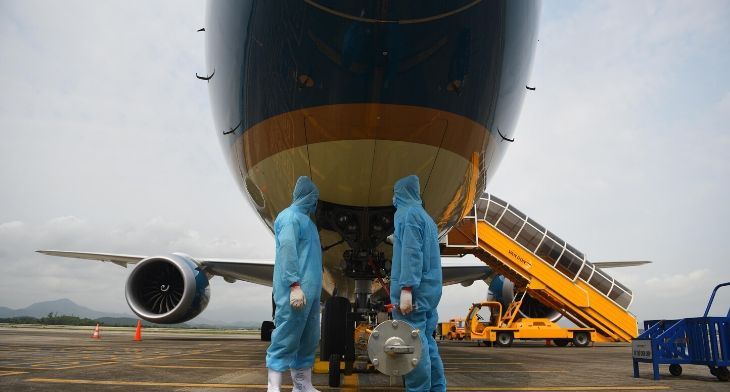 Staff working at air transport hubs across Vietnam have been busy catering for passengers who have been studying or working abroad and who have been returning home in recent weeks.

Statistics from Vietnam’s Ministry of Public Security show that more than 121,000 foreigners and around 84,000 Vietnam exited and entered the country’s air transport hubs and land border gates.

During the period 18-23 March, Noi Bai Airport in Hanoi has received around 7,500 passengers (foreigners and Vietnamese) from epidemic-stricken regions. Meanwhile Tan Son Nhat International Airport in Ho Chi Minh City has been receiving 1,300 to 1,700 people every day.

In addition Van Don International Airport (Vietnam’s newest and first privately-owned airport) in the northeastern province of Quang Ninh has received 24 flights from epidemic-stricken regions such as Wuhan (China), South Korea, Japan and several European countries with a total of 3,526 passengers, including around 345 foreign visitors.

The airport, which features modern equipment, state-of-the-art systems and carefully planned arrival processes has been specifically chosen by the Vietnamese government to receive flights to help Vietnamese citizens living abroad to return home.

“To receive flights from China, Korea and more recently Europe, we have carefully planned an implemented processes and procedures to avoid cross-contamination of staff and other passengers,” said Pham Ngoc Sau – Director of Van Don International Airport.

The airport has implemented a rigorous process to receive guests safely by creating an outdoor arrival zone to ensure normal operations can continue in the terminal.

Aircraft park in a remote area accordingly, far from the main terminal. A bus then takes passengers to an area where medical staff check their temperatures, before they complete an electronic medical declaration and proceed through immigration and customs procedures. Once they have been cleared passengers are then able to collect their luggage before being transported by military vehicles to an isolation zone.