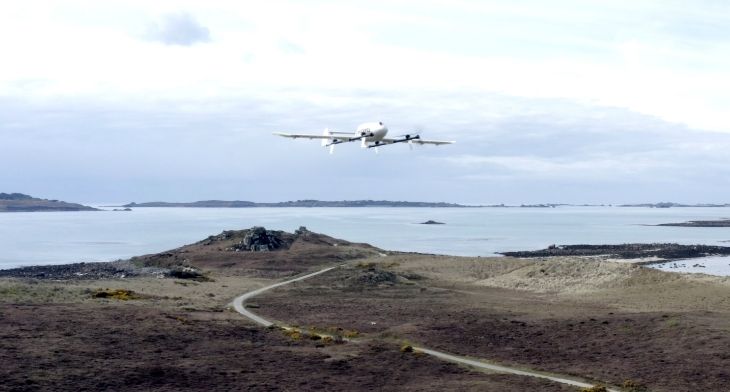 The Government-funded project will initially focus on helping the fight the pandemic by delivering crucial PPE and testing kits to the islands’ most vulnerable and remote communities.

A large, twin-engine, UK-built UAV from Windracers Limited will be used to carry mail  from the mainland to the islands, and is able to fly in poor weather conditions, including fog, potentially enabling Royal Mail to better serve remote island communities. A smaller Vertical Take-Off and Landing (VTO) drone operated by Skyports will then fly parcels between the two islands for delivery to recipients.

The project unites two pioneering companies – Windracers and the drone delivery arm of air mobility company Skyports – for the first time. It will showcase how UAVs of different sizes could be used to complement each other in the future.

Parcels will be flown to the islands’ airport in St. Mary’s by the twin-engine UAV, which can carry up to 100kg worth of mail at a time – equivalent to a typical delivery round. A smaller VTO drone, operated by Skyports, will then be used to transport items to a number of delivery points throughout the islands.

The UAVs will complement existing forms of transport for mail to the Isles of Scilly and if the trial is successful, the technology will be considered by Royal Mail to help identify opportunities to support postmen and postwomen in delivering to very remote areas and addresses across the UK.

The trial will also examine fuel efficiencies that the drones could provide, as part of the company’s continued drive to reduce emissions associated with operations.

“Drone technology has already proven its value as part of a network, bringing essential items such as mail or medical equipment to remote regions. Working with world-class partners such as Royal Mail, our team at Skyports has conducted a number of successful delivery programmes across the UK and beyond. It’s very gratifying to be part of this new project, using cutting-edge technology to connect communities and make a real difference to people’s day to day lives,” said Duncan Walker, CEO at Skyports.