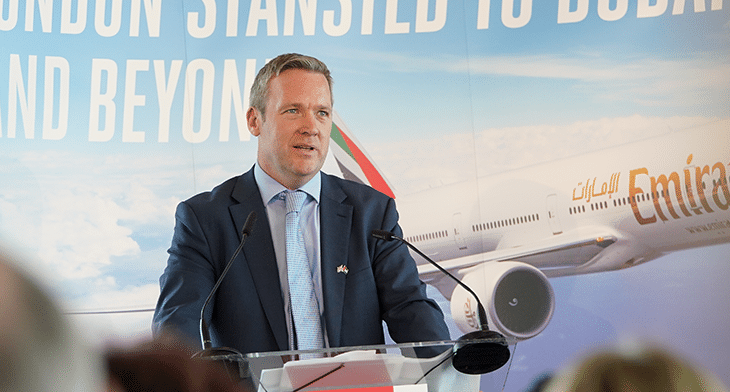 Ken O’Toole, London Stansted’s CEO, has underpinned the role that the airport plays in London’s future economic prosperity and has called on the UK Government to develop a national aviation strategy to support growth at all of the country’s airports.

Speaking at the London First Infrastructure Summit 2018 on Wednesday 12 September, Mr O’Toole addressed an audience of 500 infrastructure industry experts. He stated: “London has never been in greater need of a vibrant aviation industry and as we look to the future we need to ensure we have the connectivity to trade globally, attract overseas investment and encourage tourists to our shores. We need to make best use of available airport capacity now to make this happen.”

Referencing the $600 million investment currently underway at London Stansted, he reiterated how this will enable the airport to deliver as much as 50% of London’s total expected passenger growth over the next decade.

He also called on the UK Government to match the airport’s growth ambitions with swift and supportive action including; delivering an aviation strategy that sets out a clear plan for maximising the potential of the UK airports most capable of driving economic growth in their regions; to introduce long overdue reforms on Air Passenger Duty (APD); and committing to increased investment to reduce queue times at the border for inbound passengers to the UK.

O’Toole went on to explain how the approval of the airport’s current planning application to serve 43 million passengers a year will not only grant London Stansted a licence to grow, but  it will also give the green light to continued economic growth for London and the East of England.

“Stansted is the London airport with the most available capacity today… Our carriers are bullish about their future. London and the East of England will remain buoyant, and in order to keep stimulating growth for the airport and wider economy, we are transforming our air facilities through our £600 million investment programme.”

He added: “We have put forward a strong planning application to increase the cap on passenger numbers from 35 million to 43 million passengers per annum, an increase we will deliver within existing limits on flight movements and noise impacts.”