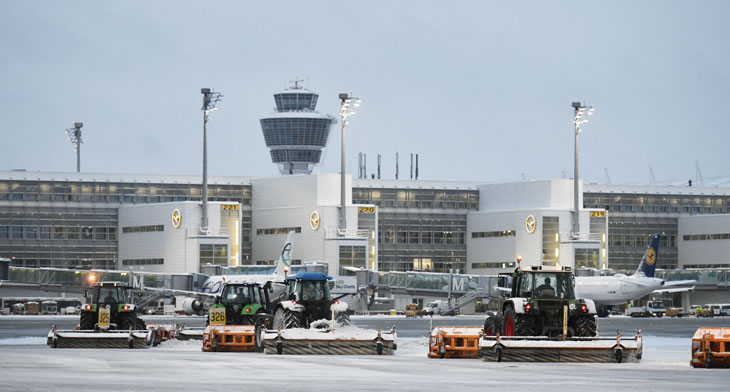 To ensure safe and smooth air travel even in freezing conditions, Munich Airport has deployed its Winter Service. The service means that the airport is able to battle freezing conditions and maintain uninterrupted flight operations on its runways, taxiways and aprons by drawing from a pool of over 600 employees capable of working with special equipment and vehicles.

The backbone of the airport’s Winter Services staff is comprised of almost 500 farmers and truckers who live in close proximity to the airport. Covering areas that amount to more than 4 million square metres, the Winter Services team are deployed to clear snow and truck it to dumping areas. This includes non-public and public areas throughout the airport.

In addition to more than 155 vehicles which are brought along by the farmers and truckers themselves, the airport has its own fleet of vehicles to help clear the airport. The two runways and the taxiways are constantly cleared of ice and snow by a total of 22 airblast sweepers and six snow ploughs along with sprayers and grit spreading vehicles. It takes just 25 minutes to clear a runway at the airport.

The Winter Services crew are kept on alert by the airport’s Traffic Management Centre, which is tasked with monitoring the airport’s operational areas around the clock. Forecasts from the German Weather Service are complemented by an ice detection early warning system that continually retrieves updated information from 18 measurement stations distributed across the airport. Braking coefficients on the runways are also continually monitored and tested using special vehicles.