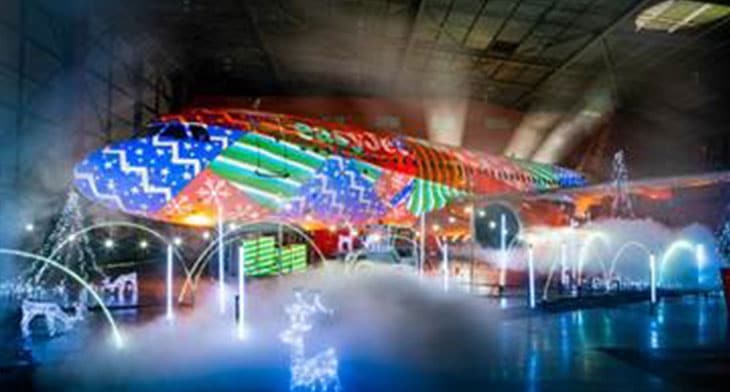 Billed as the ‘World’s Biggest Christmas Lights Show – on a plane’, London Luton Airport (LLA) wowed audiences earlier this week with the ‘switch on’ of its festive light show.

Hundreds of people gathered in the easyJet hangar to witness the spectacle as an A320 Airbus, which was festooned with 1.5 miles of multi-coloured LED lights, was unveiled. Over 850,000 choreographed light sequences and festive projections were synced to the sound of a contemporary remix of Tchaikovsky’s Dance of the Sugar Plum Fairy.

The light show is part of ongoing celebrations to mark the airport’s 80th anniversary, with airport ground staff painstakingly tasked with covering easyJet’s 5,000 sq metre hangar in lights and decorations. The team had just 24 hours to create the festive transformation ahead of the grand reveal.

Referencing the airport’s £160m regeneration project, which is expected to increase capacity to 18 million passengers by 2020, as well as add £1 billion to the UK economy and an additional 10,000 jobs by 2030, Neil Thompson, operations director at LLA said:

As we reach the end of our redevelopment, we wanted to extend a huge thank you to staff and customers and give them a special Christmas gift.

Meanwhile, Tina Milton, director of cabin services, easyJet added; “Most people who work in a regular office get to partake in festive decorating, so we laid down the challenge to ground crew to create the most spectacular light show featuring a plane. We were delighted to work with London Luton Airport to help get the festive feeling started amongst our staff and the local community in Luton.”