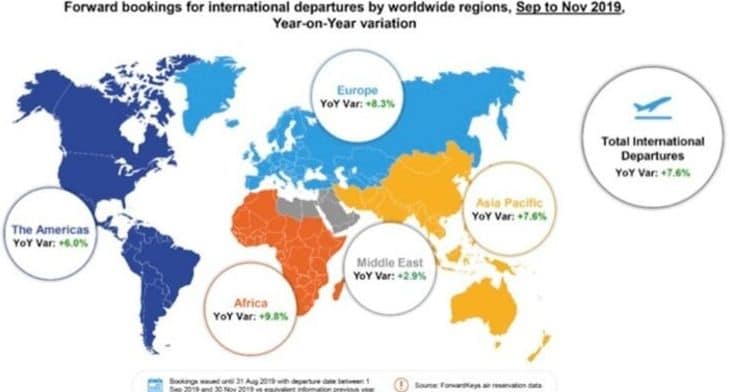 Timed to coincide with World Tourism Day on Friday 27 September, a report produced by ForwardKeys, which analyses global travel industry trends, has found that international air travel is booming.

During the first eight months of the year (January to August), international departures were up 4.9% compared to the equivalent period last year. What’s more, bookings for travel from September to November are currently 7.6% ahead of where they were at the end of August 2018.

Economic growth worldwide, alongside relatively moderate oil prices and reform of visa regulations are all credited with being behind the positive results. According to Olivier Ponti, VP Insights: “2019 has been, and is set to become, another exceptionally good year for travel and tourism, worldwide. That is good news because travel and tourism is an increasingly important driver of export revenue and general prosperity, globally. What I find particularly notable is the resilience of the industry in the face of several potentially adverse events such as Brexit, the China US trade war and political unrest in Hong Kong and the Middle East.”

From a geographical perspective, the Asia Pacific region has been leading the way. In the first eight months of 20189, international departures were up 7.9%. In second place is Africa with departures from January to August up 6%. Meanwhile, the Americas and Europe are in third and fourth places registering growth through August at 4.6% and 4.5% respectively. However the Middle East has been struggling with international departures for January to August down 1.7%.

The growth highlights in the first eight months have been from Asia Pacific to Europe, up 10.4% from Africa to the Americas, up 10.1% and from Eruope to the Middle East, up 9.7%. According to ForwardKeys report, the driving factors behind these trends, include the strong Chinese outbound market, aggressive expansion by Ethiopian Airlines which has recently increased the frequency of its flights to New York and a continued recovery in tourism to Egypt.