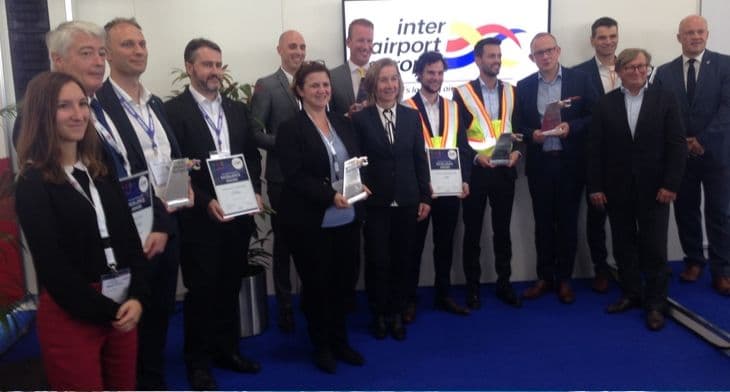 The first day of inter airport Europe 2019 kicked off on Tuesday 8 October with its Excellence Awards acknowledging outstanding services and products from this year’s exhibitors. With the event themed around ‘connecting future airports’ a new award category was added – ‘interFuture’ – in addition to interTERMINAL, interDATA, interRAMP and interDESIGN.

Vanderlande took the win for the new interFUTURE award in recognition of its BAGFLOW end-to-end baggage logistics concept. By establishing an integrated approach to the total bag process – from the bag drop right through to the aircraft – BAGFLOW enables airports to handle more bags in the same footprint, optimise resource use, and keep costs under control.

“Winning in this category is confirmation that we not only understand the challenges facing the aviation industry, but are able to define solutions that help it surpass them,” said Andrew Manship, Vanderlande’s board member and executive VP airports. He added “Vanderlande prides itself on continuously listening to its customers and working closely with them to define future-proof concepts that improve operational performance.”

Daifuku Airport Technologies took the win for interTERMINAL for its Sym3 Operator to visualise a 3D render of the baggage handling system. Users are able to accurately track bags in addition to monitoring the status of hardware live. The technology also has the ability to view and access data on any device via the web interface.

In the interDATA category, Alpha-CIM was declared the winner for ISAC – a stop bar and lead-on control system with fibre optic. The main benefits are its excellent response time, ease of implementation, suitability for incursion detection and its expandability at will by airports personnel.

Linde Material Handling was awarded the interRAMP award for its Linde Safety Guard, which detects other vehicles or pedestrians before they recognise each other. It can reduce speed automatically in defined areas and can be configured to suit many dangerous scenarios. Active alarms triggered by hazards mean operators and pedestrians can react immediately.

Finally VRR was awarded the interDESIGN category win for its inflatable Air5. The innovative  container weighs approximately 68kg, folds out automatically and is inflated in just 30 seconds using air pressure.

Speaking at the awards ceremony, Nicola Harmann, managing director, Mack Brooks Exhibitions revealed a total of 53 companies had entered their products and services in the awards, which are then voted for online.