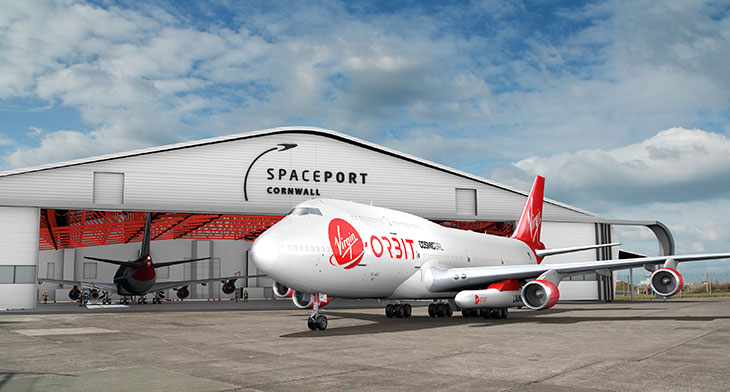 The UK Space Agency and Cornwall Council intend to make available up to £20 million in funding – made up of up to £12 million from Cornwall Council (subject to approval by the full council), alongside up to £7.85 million from the UK Space Agency. A further contribution of £0.5 million will come from the Cornwall and Isles of Scilly Local Enterprise Partnership. The investment remains subjective to business case approval processes.

The funding will allow Spaceport Cornwall and the US launch operator Virgin Orbit, who are also investing an additional £2.5 million, to develop facilities and operational capabilities that would enable small satellite launch from Cornwall in the early 2020s.

The agreement between Spaceport Cornwall and Virgin Orbit was announced last July during Farnborough International Airshow. The partners are seeking to deliver a horizontal launch Spaceport at Cornwall Airport Newquay by 2021. The satellite launch company opted for Cornwall in the South West of England as an ideal location to operate and deliver one of the first launches of its LauncherOne system outside of the US, highlighting Cornwall Airport Newquay’s long runway and uncongested airspace as key reasons behind the decision.

“These exciting plans from Spaceport Cornwall and Virgin Orbit to make horizontal launch a reality from Cornwall will help further our position as a leader in the New Space Age,” commented Business Secretary Greg Clark. “Alongside our commitment to the proposed vertical launch spaceport in Sutherland, this is making the UK the most attractive place in Europe for those looking to Earth’s orbit and beyond.”

The UK government is currently working with the United States to establish the necessary technical and legal safeguards for US space launch vehicle operations from UK launch sites.

The US State Department has already approved a Technical Assistance Agreement (TAA) allowing detailed technical discussions and strategic planning to commence, which would allow Virgin Orbit to operate its LauncherOne system and carrier aircraft, a modified 747 named ‘Cosmic Girl’, from Cornwall Airport Newquay. A maiden US launch is expected later this year.

“Cornwall is the birthplace of innovation and technology and space is at the heart of our 21st century economy,” said Julian German, leader of Cornwall Council. “With assets like Spaceport Cornwall, world-class mission control facilities at Goonhilly Earth Station and superb digital connectivity, Cornwall will play a vital role in the growth of the global space economy,”

It is anticipated that Spaceport Cornwall could create 150 jobs, and enable the UK to compete for a share of the global market for launching small satellites – worth a potential £3.9 billion to 2030.

“This announcement is the culmination of five years’ hard work and will be transformative for Cornwall,” said Mark Duddridge, chair of the Cornwall & Isles of Scilly Local Enterprise Partnership. “It puts us and the UK at the heart of the international satellite launch market, offering affordable access to space, and will inspire a generation.”

The Aviation Minister, Baroness Vere commented that the “Government support and collaboration with operators like Virgin Orbit will help cement the UK’s position as an aviation world leader, unlocking potential and creating jobs.”

Virgin Orbit suggest that with its carrier aircraft LauncherOne offers satellite customers an “unparalleled level of control” over when and where spacecraft are deployed and expanding to an additional launch site in the UK further enhances the agility and flexibility of Virgin Orbit’s dedicated launch services.

Dan Hart, CEO of Virgin Orbit, said, “The Virgin Orbit team has now demonstrated every major assembly of our LauncherOne system and are within arm’s reach of bringing to the UK. We’re thankful for the leadership of Minister Skidmore, MP Steve Double, Cornwall Council, the LEP and the UK Space Agency in making this partnership a reality.”