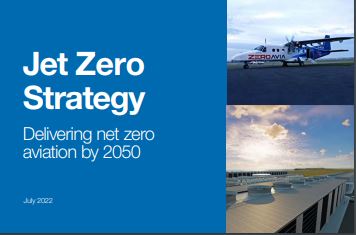 With Tuesday 19 July marking the hottest day in British history, the UK Government chose Farnborough Airshow to launch its “Jet Zero” strategy. The irony of temperatures climbing to a high of 40.2 degrees while the UK Transport Minister Grant Shapps attended this year’s airshow to outline how the country plans to decarbonise aviation didn’t go unnoticed.

The UK’s Met Office has revealed that extreme temperatures in the UK have been made 10 times more likely by climate change, while Shapps underlined in the strategy that at current rates, aviation is expected to become one of the largest emitting sectors by 2050. “We have to break the link between air travel and rising global temperatures,” said Shapps, alongside Robert Courts, Minister for Aviation and Trudy Harrison, Minister for Transport Decarbonisation in the strategy’s foreword.

“Aviation’s success must no longer damage the plant. That is why we have developed the Jet Zero Strategy – not only securing a more sustainable future for our climate, but also for our aviation industry, and the critical role it plays in boosting trade, tourism and travel.”

The strategy is underpinned by an overarching approach and three principles with measures to achieve jet zero that include making domestic flights net-zero by 2040 and all airport operations in England zero emissions by the same year. In addition and having committed £180 million of funding to support the development of a UK sustainable aviation fuel (SAF) industry the government’s aim is to unlock further private financing to develop the UK’s own SAF plants with a commitment to have at least five plants under construction by 2025 and a SAF mandate in place with a target of at least 10% SAF by 2030. There has already been real progress in the UK on this front with Phillips 66 producing and providing the first commercially produced SAF in the UK at its Humber refinery.

“Innovation has long been clear and often evidenced right her at Farnborough,” said Shapps speaking at the airshow. “Now the industry must embrace that change once again, tackling the defining issue of our time, climate change – which is so vividly experienced in the heat here today.”