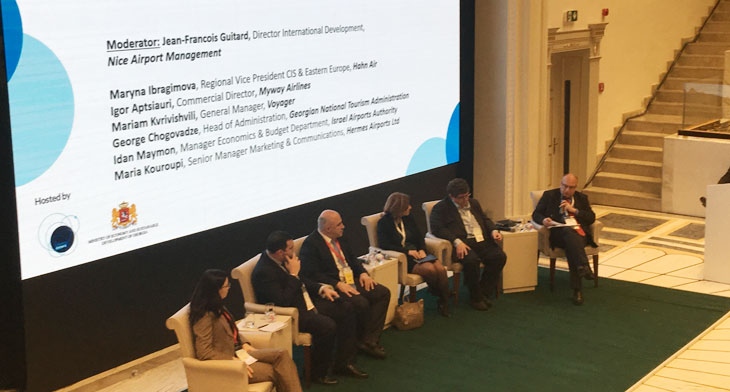 Connect 2018: Spotlight on the Eastern Medite..

With impressive growth of 40+% in passenger traffic across its three main airports in 2017, Georgia is a prime example for other destinations in the Caucasus region of how working together airports, airlines, tour operators and tourist boards can really boost a country’s potential in terms of visitor numbers and revenue.

“It’s important that we support airlines and airports in the country and look to increase direct services to Georgia,” said George Chogovadze, head of administration at the Georgian National Tourism Administration.

Chogovadze was joined by several other speakers in a panel discussion about developing the Eastern Mediterranean and Caucasus Market on Wednesday 21 February at the 15th Connect route development forum in Tbilisi, Georgia.

Idan Maymon, manager economics and budget department, Israel Airports Authority (IAA) – which manages all civilian airports across the country – reiterated the need for all bodies to work together. But he also pointed out that understanding what a country has to offer and then raising awareness of that is key.

He also focused on Ramon Airport, the latest addition to Israel’s airport scene, which is due to open in the coming months. Replacing Eilat Airport, Ramon is set to handle 2 million passengers a year upon opening and will cater for all domestic traffic to Eilat, as well as the growing number of international low-fare flights from Europe. Operating 24 hours a day it will also offer lower ground handling costs than its predecessor thanks to services being offered by two competing handlers.

Reinforcing the point that understanding your market is key, Maria Kouroupi, senior manager of marketing and communications at Hermes Airports which oversees Larnaca and Paphos airports in Cyprus, said: “With year-round sunshine, 80% of our inbound traffic is passengers travelling for leisure. So now the push is to sell Cyprus as a destination with an enviable climate and a variety of experiences and activities that are accessible throughout the whole year.”

She also revealed that to attract more visitors from Asian markets such as China, Hermes would like to develop a ‘regional hop’ package combining two destinations within one trip. “So we’d like to be able to offer Cyprus alongside another easily accessible destination within the region, such as Greece, Jordan and even Israel,” she said.

Maymon wasn’t convinced that Kouroupi’s ‘regional hop’ product would take off as the security situation in certain countries would prove restrictive. But he did agree that there was a need to diversify saying he believed there has been a shift in the mindset of holidaymakers.

“The concept of a traditional two-week holiday is dying out,” he said, before adding that “low-fare travel and an increase in air traffic has meant that passengers are looking for shorter, more frequent breaks away”.

He concluded that the aviation sector, including airports, needs to respond to this shift by ensuring it caters for short getaways and facilitating easy access to different destinations within the same country.