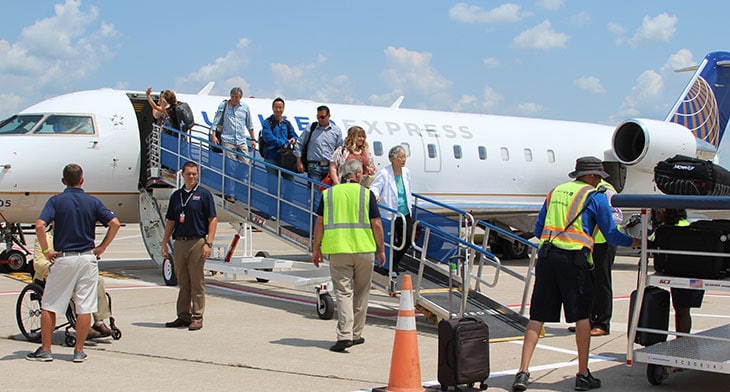 Columbia Regional Airport has celebrated the re-opening of its main runway 30-days ahead of schedule on 24th May.

As of 7:00am on 24th May commercial air traffic were able to use the airport’s main runway 2-20, with the airport commenting in a facebook post: “Sound planning, a great contractor and subs, and some lucky breaks in the weather mean we’re able to announce the early reopening (about 30 days early!) of COU’s main runway.”

In a later post the airport shared a video by the contractor Emery Sapp & Sons who were behind the runway repair project, which showed the pavements areas on 2-20 “which were replaced providing extended life to COU’s main runway.” The airport added, “Thanks for your support and patience while we maintain and improve your Columbia Regional Airport.”

The main runway was closed for maintenance on 1 April and while works were carried out on the main runway, airlines were using the secondary runway 13-31 which was rebuilt in 2017 as part of the airport’s Master Plan.

Set in 2009, the Master Plan was created to address a number of infrastructure projects “to ensure COU had adequate infrastructure to handle the needs of a modern commercial fleet.”

The local authority explained: “A part of that plan was to replace the original crosswind runway to accommodate commercial air traffic when the main runway (2-20), which is 50 years old, would need maintenance. In 2017 the secondary runway (13-31) was completely rebuilt in anticipation of the main runway maintenance project in 2019.”

However in early April this year, several flights were cancelled by regional carriers with airlines indicating concerns over the ‘crown’ where runway 2-20 and 13-31 intersect. The crown is required by the FAA in all main runways to assist with water draining off of the runway, however, the crown could cause the feeling of hitting a bump during takeoff and landing.

In response to these concerns, the airport closed the runway 13-31 on 9 April 2019 to begin modifications – closing the airport to all commercial and general aviation traffic. Though expected to open on 15 or 16 of April, the runway reopened ahead of schedule on 13 April after the completion of the modifications.