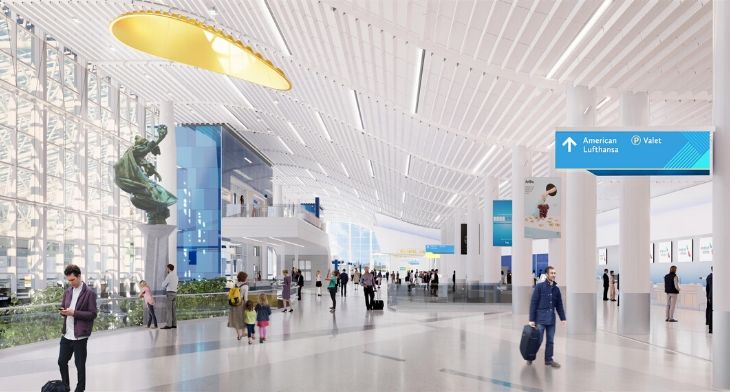 Charlotte Douglas International Airport (CLT) in North Carolina, US, has celebrated the groundbreaking of its Terminal Lobby Expansion project, the biggest construction project in the airport’s history.

The airport is served by a variety of airlines, including several regional and low-cost operations and the $600 million project will add 175,000 square feet and renovate another 191,000 square feet to the terminal lobby, providing additional circulation space on the Arrivals/Baggage Claim, and Departures/Ticketing levels.

“The Airport has been preparing for years to begin construction of the Terminal Lobby Expansion,” said aviation director/CEO Brent Cagle. “We began in 2013 with the removal of the original Hourly Decks to build the new roadway and make room for the expansion. Now that we’ve broken ground, we’re excited to start a project that will go above and beyond modernising the terminal.”

The project is part of a $2.5 to $3.1 billion capital investment programme, Destination CLT, to meet passenger growth through 2035.

Designed by Gresham Smith and DAS Architecture, the project will include the 370,000 square-foot expansion, a 150,000 square-foot canopy and two passenger skybridges connecting the curbside and existing rental car/hourly parking garage, as well as renovations to the existing portions of the terminal lobby.

The airport’s five security checkpoints will consolidate into three larger checkpoints with automated screening lanes, which the airport suggests will be more efficient and help expedite the screening process.

The exterior canopy will cover the Elevated Roadway and Terminal Curb Front to shield passengers from weather, and two pedestrian overhead walkways and two subterranean walkways will connect the Hourly Deck to the terminal, allowing visitors to bypass upper and lower level airport road traffic.

“Our passengers will be very pleased with the outcome,” Cagle suggested. “We’re taking a 37-year-old building and converting it into a state-of-the-art facility that offers the latest amenities, stunning artwork, new concessions and nearly doubles the space in Ticketing and Baggage Claim.” 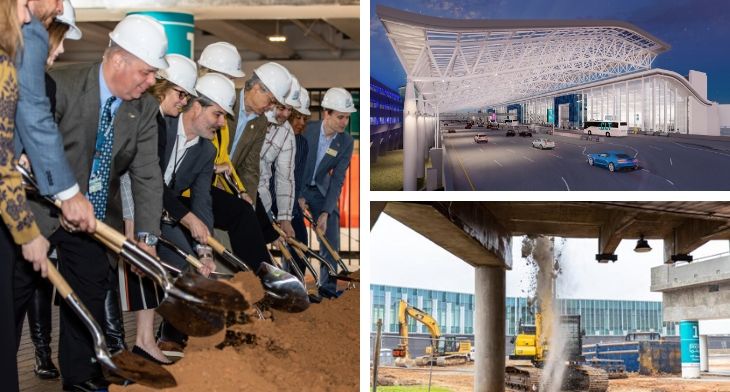 The project is set to help address the growth seen at Charlotte Douglas airport, as passenger numbers have grown from 2.8 million in 1982, when the terminal opened, to 12.5 million originating passengers last year. That is in addition to the more than 33 million connecting passengers, for a total of more than 46 million customers in 2018 – an all-time high. The airport said it is on pace to break that record this year.

A key feature of the airport is the Queen Charlotte statue, which has inspired some of the forms for the building design. In 2021 the statue will take center stage inside but will be enclosed in a box until the expansion is complete.

“Charlotte is known as the Queen City. So, as part of our Destination CLT capital investment program, we’re building an airport fit for the queen,” commented Jack Christine, chief operating officer at Charlotte Douglas. “Gresham Smith’s design for the Terminal Lobby Expansion reflects our unique region and really elevates the passenger experience. Our commitment to our passengers also means maintaining a high level of service throughout construction. Collaborating with construction managers, Gresham Smith developed an effective, phased approach to address our large, complex project.”

The terminal expansion will take five and a half, to six years to complete and will be carried out in six phases.

“We are excited to work with the airport and partners to bring the new terminal lobby to life. The design extends the passenger experience from the terminal to the curbside, providing a sense of hospitality before travellers even enter the expanded and re-imagined Terminal lobby,” said Wilson Rayfield, AIA, LEED AP, executive vice president, Gresham Smith. “With the goal of providing passengers with the ‘royal treatment’ our solution marries a sense of place and delight with smart design to accommodate travellers’ needs.”

As well as the benefits to the airport, the project is expected to benefit the local community through construction jobs and the purchasing of goods, materials and services.