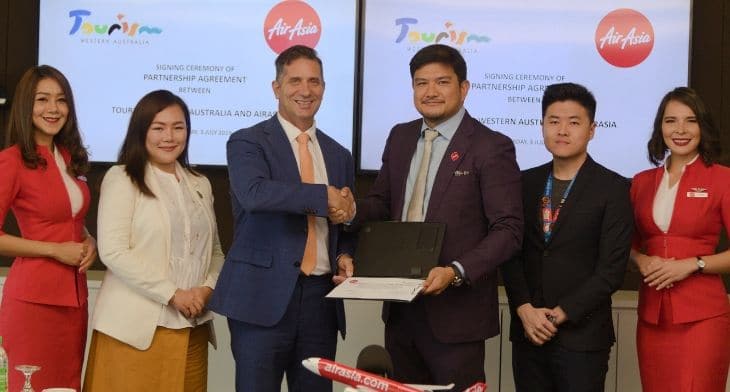 Western Australia teams up with AirAsia for marketing push

The deal, worth A$1 million, aims to further promote Western Australia’s tourism highlights in markets such as Malaysia, as well as India, China and Japan.

The agreement with the low-cost carrier will see joint marketing campaigns developed to promote affordable flights to Western Australia, including flight deals, print, television, radio, cinema and online advertising. It is hoped that the combined campaign activity in Malaysia alone could generate more than 29,000 visitors.

“We know that well promoted low-cost air fares are a strong drawcard for people to visit Western Australia and this deal with AirAsia will provide that in some of our important markets such as Malaysia, India, China and Japan,” said Tourism Minister Paul Papalia. He added that Malaysia is Western Australia’s second biggest source of overseas visitors.

“This marketing agreement will not only encourage more Malaysians to visit the State but the marketing activity in connecting markets of India, China and Japan will help entice holidaymakers from those markets as well,” he continued, adding, “Growing tourism is key to the State Government’s plan to diversify the economy, create jobs and develop business opportunities. Increasing the number of people travelling here from overseas will help achieve those objectives, which is why we committed an extra A$12 million (RM 34 million) to Tourism Western Australia’s international marketing activity.”

AirAsia X Malaysia CEO Benyamin Ismail explained: “Since we began flying to Western Australia in November 2008, we’ve carried more than three million guests on Kuala Lumpur-Perth, Bali-Perth and our latest route between Lombok and Perth, which was launched last month. In 2018, AirAsia carried more than 585,000 guests to and from Western Australia.

“Demand for Perth and greater Western Australia is evident and the continuous support from Tourism Western Australia will enable us to push the envelope in terms of tourist arrivals through joint marketing efforts in Malaysia, India, China and Japan, where our route network is the strongest.”