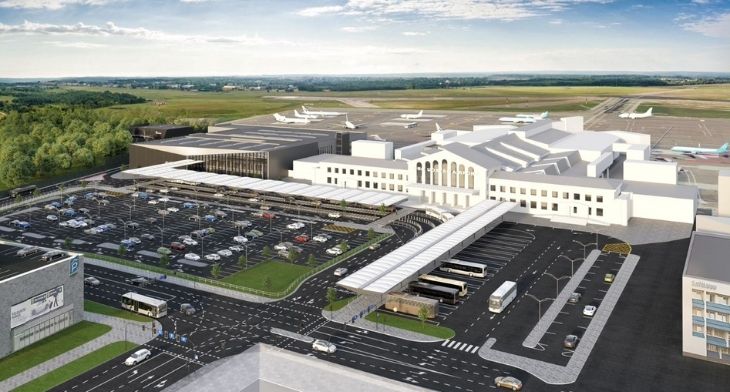 Part of the Lithuanian Airport network, Vilnius Airport is looking for a contractor to construct a new module of its passenger departures terminal in the northern part of the airport.

The new two-storey departures terminal will sit between he existing departures and the VIP Terminal & Conference centre. The ground floor will feature a passenger check-in area with a self-service zone. There will also be common public spaces, cafes and other commercial areas and airline offices.

Luggage screening and sorting facilities, rooms for engineering systems are being designed in the eastern part of the building, while a passenger security screening area as well as departure and arrival gates for Schengen passengers are planned to be situated on the second floor. The new terminal will be connected to the existing passenger terminal by a spacious walkway, which will ensure comfortable connection between the two terminals. The new facility will also have two new air bridges.

“Already before the pandemic, Vilnius Airport had reached its capacity limits,” said Dainius Ciuplys, Head of Operations and infrastructure at Lithuanian Airports. “This development is very important both for us and the passengers. The new terminal will expand the operational and technological possibilities of the airport, which are related to the direct activities, and will allow to increase the range of non-aviation services. In the longer term, we will be able to easily initiate qualitative changes and introduce new enhancements in the existing terminal,” he continued.

With plans to start work next year, Vilnius Airport plans to select a contractor for the construction of the new terminal by mid-2022 with it going live by the end of 2024. Once complete the total area of all passenger terminals at the Lithuanian gateway will increase by a third. Passenger throughput will double – from 1,200 passengers per hour to 2,400