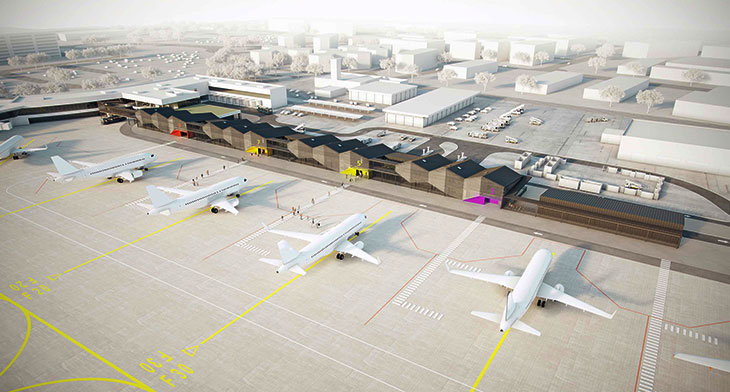 This year the new facilities being constructed at Toulouse-Blagnac Airport in France are to be gradually put into operation, with a low-fare and regional jetty to open in Spring.

In December 2017 the airport welcomed its 9 millionth passenger of the year, a new record footfall with growth of one million additional passengers in a year.

The airline reported that this growth has been “helped significantly” by three low-fare airlines: easyJet, Ryanair and Volotea “and confirms the success of the Toulouse-Paris connection, the leading route in Europe, which is largely fuelled by the Air France shuttle.”

The completion of the expansion works at the airport will support the growth in passenger traffic, as well as offer new services to travellers and airlines. Work began in the first quarter of 2017 to construct a new shopping area, security checkpoint system, a boarding jetty and 4-star hotel.

In the north of the airport, an extension of Hall D will accommodate all the security checkpoints with new generation equipment and a single access point to the boarding areas. The airport will also develop a new commercial area of 5,000m² dedicated to shops with around 20 new retailers and a redesigned food court offering. This extension is expected to open in winter 2018.

In Hall A, a 2,500m² jetty is being created to address the strong growth in low-fare traffic, with a waiting area, direct access to the tarmac, walk-on boarding for aircraft parked close to the jetty, and a quicker turn around for low-fare and regional airlines. The jetty is due to open in spring.

Hall A will also see the construction of a 4-star hotel with 148 rooms, directly connected to the hall, which is opening in autumn 2018.

The airport has also chosen the retailers for the commercial space that will open in 2018 in the boarding area with 17 shops (10 currently), 15 eateries (from 8 this year) and a duty free enlarged from 680m² to 1,850m². The expansion works will allow for the development of a much larger commercial area (5,000m² compared to 850m² currently available in the departure lounge of Halls C and D).