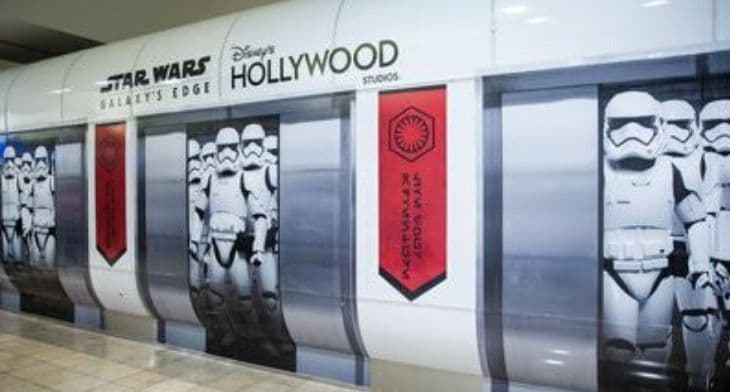 The force is strong at Orlando International Airport

Orlando Airport is taking passengers to another galaxy thanks to its artistic renderings that wrap shuttle stations within the airline terminals. To coincide with the opening of the new 14-acre land inside Disney’s Hollywood Studio’s at Walt Disney World, the aim of the renderings is to make passengers feel as if they’ve stepped into Star Wars: Galaxy’s Edge as soon as they arrive at the airport.

The design project is a creative first for Central Florida’s main transport hub and Disney is the first organisation the airport has invited to create artistic renderings.

“We are constantly evolving the airport experience to make it more service oriented, passenger friendly and fun,” said Raymond Anderson, senior director of concessions and properties for the Greater Orlando Aviation Authority. Passengers arriving at the airport will see the life-size depictions of Star Wars: Galaxy’s Edge as they prepare to board shuttles for the airport’s main terminal. Combined the scenes, which will stay in place until 2020, stretch longer than eight full-size buses.

With Walt Disney World a popular Florida attraction, this new installation provides a preview of what holidaymakers can expect at the world-famous theme park. “It’s also the most recent in a long line of collaborations between the airport and Disney over the decades.”

Commenting on how the art installation reflects the strong relationship between the two organisations, Claire Bilby, senior VP of sales, services and events for Walt Disney World, said: “We’ve had a string of fruitful projects with the airport, like having two supersonic jets land simultaneously to celebrate the opening of Epcot in 1982, creating the groundbreaking Disney’s Magical Express service in 2005, and this first-of-its-kind art installation. The airport is Central Florida’s ‘welcome’ to visitors from around the globe. We’re honoured to put oru Disney magic to work in making that welcome exciting and memorable.”