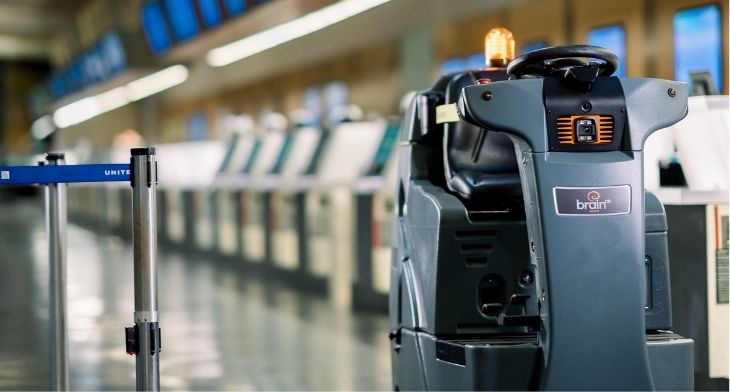 The company has more than 14,000 autonomous robots in use worldwide and is currently teaming up with manufacturing partner Tennant to expand operations into European airports. Partners such as Tennant are using Brain Corp’s BrainOS AI Software platform to create autonomous robots at scale across industries and applications, including floor scrubbers, vaccums, in-store delivery tugs, and shelf analytics applications.

The fallout from the virus has seen an unprecedented rise in the use of autonomous cleaning robots with 73% of supply chain managers stating that robotics will be important in the future. With hygiene now a top priority, cleaning robots have been introduced to achieve a new and trackable level of clean for airports and to encourage passengers back into airports as lockdowns continue to ease.

Explaining that AI and robotics is the new frontier of innovation, Jon Thomason, Brain Corp’s Chief Technology Officer, explained that “Brain Corp has cracked the code for bringing autonomous robots out from behind cages and tightly controlled environments, so they can drive value for organisations and their employees operating in high-traffic commercial locations.”

Having joined Brain Corp in September, Thomason’s goal is to expand upon Brain Corp’s success in making robots simple and easy to use, while improving their functionality to collect and analyse environmental data that previously was not available, or hard to get.

Robotic cleaning technology has obvious advantages for airports in that it is capable of heavy lifting, as well as cleaning efficiently at the same speed and pressure. Heat maps built into the software used for the robots show where and how much surfaces have been cleaned. What’s more robots can be used throughout the day and night with minimal disruption to passengers.