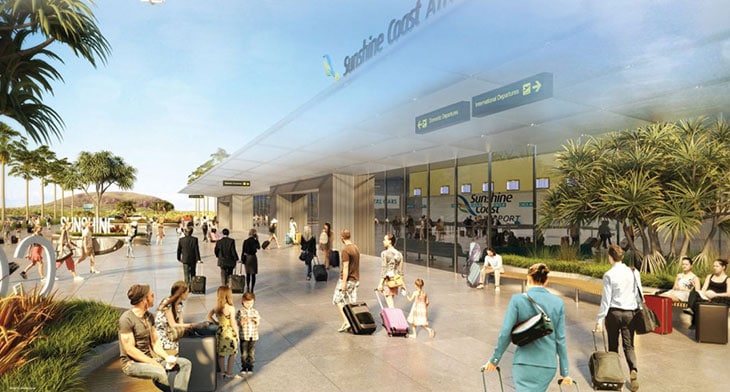 Sunshine Coast Airport in Queensland, Australia, has delivered its Draft Master Plan, outlining plans for the evolution of the airport over the next two decades and beyond.

The airport suggest the SCAEP will deliver “one of the Sunshine Coast’s most significant transport, tourism and economic infrastructure assets, adding $4.1 billion to Gross Regional Product between 2020-2040, and opening up new direct destinations in Australia, the Pacific and Asia.”

The Draft Master Plan outlines that Sunshine Coast Airport will operate with one runway (13/31) following its inauguration at the end of 2020. This runway will be able to accommodate all current aircraft operators as well as wide-body passenger aircraft which cannot use the existing runway.

It will also enable aircraft to carry full passenger and freight loads, which are currently prevented due to the restricted nature of the existing runway. Once the new runway is in operation, the existing runway will be fully de-commissioned.

Last year, the Sunshine Coast Council, responsible for delivering the new runway, announced that the southern section (approximately 1,000 metres) of the existing runway 18/36 would be permanently closed and re-purposed as a taxiway providing access to the southern apron because the tails of larger, wide-bodied aircraft flying to international destinations beyond Auckland would impede the safe operation of the new runway.

While an additional 800 metre runway 18/36 was contemplated north of the new runway 13/31, expert advice commissioned by the airport recommended against the proposal because of “significant safety concerns due to alignment and converging runway issues.”

The airport suggest the new plan could open the Sunshine Coast to the world through new and additional routes and services, enhance the airport to meet the needs of the growing region, and plan for terminal enhancements to upgrade passenger comfort.

It is also hoped that the plans will drive economic development on the Sunshine Coast and generate new employment opportunities for the community.

“The delivery of the Draft Master Plan marks a new era for the Sunshine Coast economy and community,” said Sunshine Coast Airport chief executive officer, Andrew Brodie. He added that the draft plan follows extensive consultations with airport tenants, local stakeholders and experts, “to ensure that we have an airport that can cater for the dynamic growth expected across the region, while also being one of the most efficient and safe regional airports in the country.”

“The current runway dates back to 1983, and the aviation world has changed dramatically in the subsequent 36 years. The Draft Master Plan will ensure we have the facilities and capacity to meet the massive opportunities that are likely to emerge as a result of the $347 million investment in the Sunshine Coast Airport Expansion Project,” Brodie continued.

“With the delivery of the new runway at the end of next year there are some immediate priorities to ensure that the airport is fully prepared to meet the new demands, but equally we have outlined plans that look to 2040 and beyond,” Brodie added. These plans include land-use priorities to ensure there is space for developments such as increased freight handling facilities.

“The release of the Draft Master Plan comes at an exciting time for Sunshine Coast’s future development,” Brodie continued, as it coincides with other infrastructure projects. “I have no doubt that the evolution of the airport will prove a game changer for the Sunshine Coast, its economy and the community.”