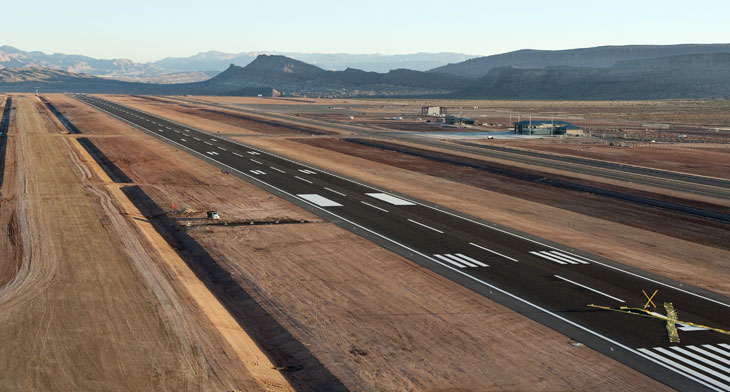 St. George Regional Airport, in Utah, has closed for four months to complete repair works on the runway.

The regional airport closed on 29 May and will reopen on 26 September, in order to repair the runway which has blue clay close to the surface. Blue clay is an expansive, unpredictable soil that can expand significantly if it absorbs enough water.

David Cordero, communications and marketing director for City of St. George, told Regional Gateway: “In addition to blue clay, several types of expansive clay sit underneath the runway, and they expand at different rates, creating bumps. When that happens, there can be extensive damage.”

“In consultation with the FAA, it was determined that the movement of the runway was significant enough that repairs needed to be made sooner rather than later,” Cordero added.

During the repairs, 5,400 feet of the runway will be removed and excavated to a depth of 17 feet to remove the blue clay, a five-foot-deep clay plug will be placed in the bottom of this area to prevent moisture from reaching the ground under the runway. Then at two feet below the surface, a water impermeable membrane will be placed in an area 7,000 feet long by 650 feet wide, to further prevent water from getting into the soils.

Phase I of construction has already begun as contractor JP Excavating has been on-site at the airport excavating material to create suitable fill to be used under the new runway as part of the stable base. The airport explained that removal of this material will also allow the airport to add additional hangars in the future. This phase of the project is a 45-day contract and is expected to be finished in the first week of June.

Phase II, the removal and replacement of the runway will start 29 May in a contract for 120 working days, with completion expected by 26 September.

Cordero explained that FAA grants are paying for the majority of the costs or repairs which accounts for 91% of the funding, with the rest to come from Passenger Facility Charges.

The airport is operated by the City of St. George and in a social media post the authority commented: “Thanks for your overwhelming support of SGU – St. George Regional Airport in 2019. SGU will be closed for necessary repairs until Sept.26 – just ahead of the St. George Marathon and Hunstman World Senior Games – and will be back better than ever! There will also be added service to Dallas-Fort Worth!”

Some cosmetic improvements to the terminal will also be made in this time, with upgrades to the restroom facilities, and new paint and carpet in certain areas. The airport will also add large fans in the Canyon area to help with ventilation.

Cordero commented that with the runway repairs, “The pilots will notice a less bumpy ride and we anticipate much less runway maintenance than before.

“We appreciate the public being patient with us during the runway project. When we reopen 26 September, we expect to be as busy – or busier – than before,” he concluded.

The airport will be closed to all fixed-wing aircraft during this time, but helicopters will still be able to operate into the airport.

The closure dates for the repair works were determined in consultation with SkyWest Airlines to consider their slowest times of year. With the airport’s closure, SkyWest is also changing its schedule at Cedar City Regional Airport to accommodate a third flight in and out of Cedar City, Sunday through Friday.