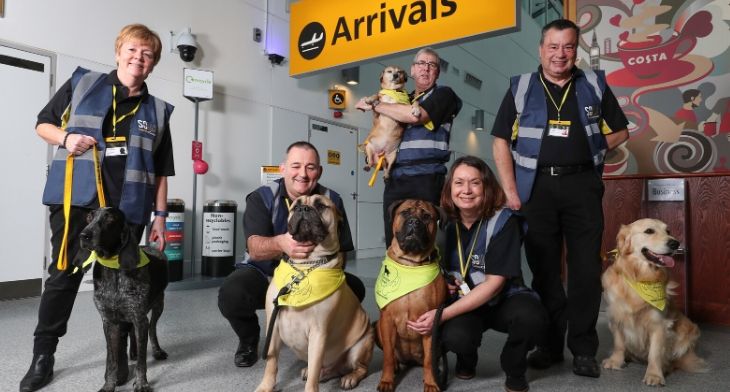 Southampton International Airport has employed some four-legged helpers to help soothe nervous fliers and passengers with hidden disabilities. The Canine Crew, a pack of therapy dogs from the charity Therapy Dogs Nationwide, will be on patrol once a week and will be stationed in arrivals as well as departures along with their volunteer handlers.

Fully temperament tested and highly experienced in their trade, the therapy dogs will benefit passengers as well as staff in the airport.

“Four-legged companions are well known for boosting general happiness, well-being as well as mood and we are very excited to welcome them to the Southampton Airport family,” said Simon Young, Head of Passenger Operations. “Our sister airport in Aberdeen was the first in the country to trial airport therapy dogs and we are happy to be carrying on that legacy,” he added.

The launch of Southampton Airport’s Canine Crew on Tuesday 14 January coincided with a charity collection for national pet charity, Blue Cross. Commenting on the collaboration Kirsty Smith, Rehoming Supervisor at Blue Cross Southampton said: “We see every day how incredible pets are and how much of a benefit they bring to our lives; through the joy they bring and often helping alleviate our stress and worry in difficult situation.”

Meanwhile Paulette Hockley, Placement Officer at Therapy Dogs Nationwide, added: “We are very privileged to have passionate volunteers who keep our charity running by taking their own dogs into establishments to give comfort, distraction and stimulation.