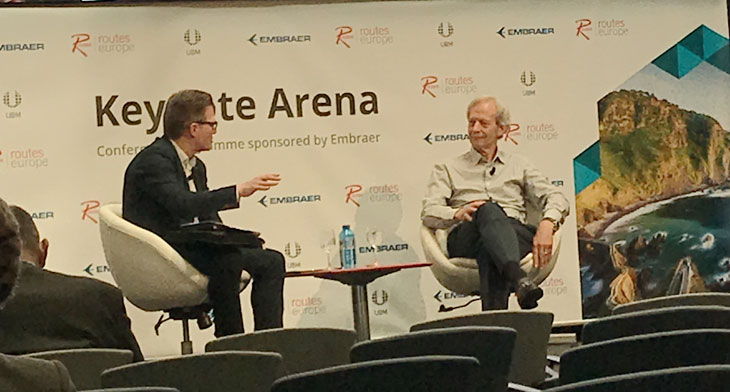 Aviation industry leaders from more than 300 airports and 100 airlines have converged in Bilbao, Spain for the 13th annual Routes Europe event this week, to negotiate new networks and services throughout Europe.

Airports have been busy pulling out all the stops (literally champagne corks were flying on the show floor) as the first day of the exhibition and conference drew to a close on Sunday 22 April. 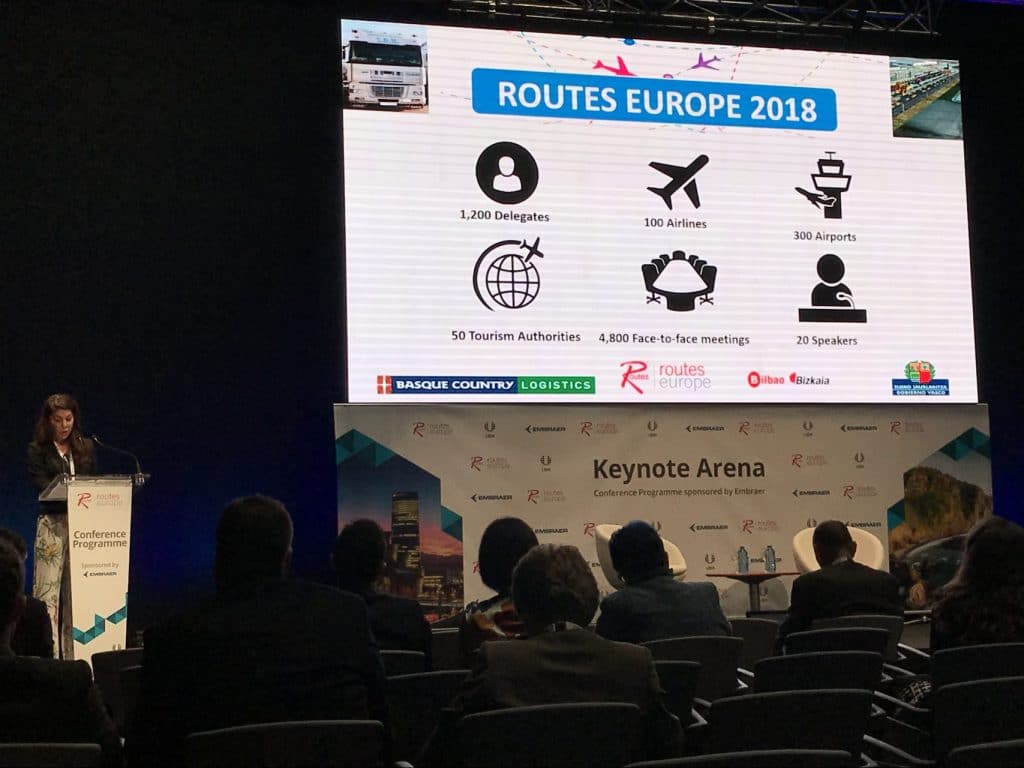 Meanwhile in the conference sessions, a keynote address from the Basque Government’s transport planning director, Janire Bijueska highlighted that Spain’s Basque region is ripe for investment and trade with three airports serving 56 destinations.

Bijueska cited that as Northern Spain’s largest airport, Bilbao connected around 5 million passengers to cities across Europe last year (an 8.4% increase when compared with figures from 2016).

Having been made easyJet’s CEO in 1996, Webster is credited with developing one of the biggest LCC brands, not only in Europe, but around the world.

“One of my biggest challenges when I first joined the airline was to get Stelios away from pricing,” Webster said, revealing that when he started with the airline, its founder, Sir Stelios Haji-Ioannou, would monitor the flights constantly throughout the day and then adapt the seat prices accordingly.

“I’m quite confident at coding, so I wrote a programme to set the initial pricing model into the system,” he added, explaining that this enabled the airline to monitor the sales rate and adjust the price accordingly with the number of remaining seats.

While he may have been instrumental behind success of easyJet’s low-fare model, Webster confessed that he isn’t a fan of the long-haul, low-cost sector. “I understand the appeal for young people and students, but I don’t see it becoming a mainstream market. If you’re travelling six to eight hours you want some level of comfort,” he said.

He also cited that he believes high-speed rail travel is currently the biggest threat to LCCs within Europe. Describing France’s high-speed rail network as “quick, efficient and fatigue-free,” he noted that when travelling by train there’s no hassle of waiting around at an airport and passengers travelling by rail can carry on with their work without interruptions.

Referencing poorly utilised airports (such as Luton and Stansted) as instrumental to easyJet’s success in the early days, Webster enthused that dedicated low-cost terminals are key to ensuring optimal performance from a low-fare carrier in today’s market. He concluded that the joy of working with a start-up, as easyJet was when he joined, is that “you’ll attract like-minded, passionate, talented people who are prepared to put in the hours.”

Wrapping up the conference sessions for the day, Edinburgh Airport’s CEO, Gordon Dewar and easyJet’s group director of strategy and network, Robert Carey discussed the importance of the airline-airport partnership.

“The cost element is a crucial part of our business, but that doesn’t mean we believe in doing things on the cheap,” said Dewar. “It’s all about working in a partnership, building trust and being constructive so that when there’s an issue we can address and respond to it.”

The pair highlighted four areas they are focused on in terms of their relationship: Developing new product offerings, such as Worldwide by easyJet; forming an innovative cost structure that benefits the airline, airport and passengers; building infrastructure that can cater for future demand; and finding new opportunities for example accessing multiple data sources to gain a better understanding of the local market and to develop profitable routes.