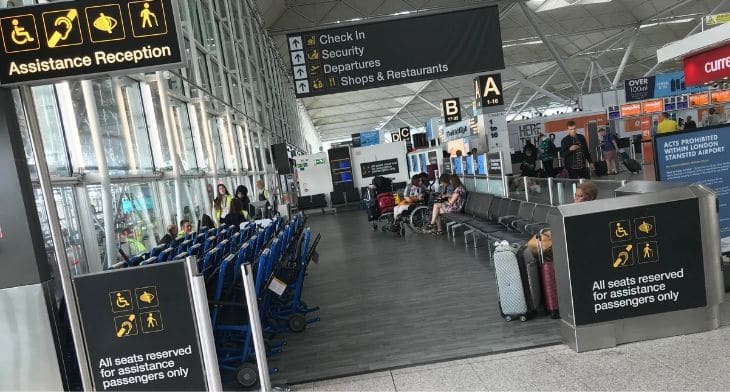 The UK Civil Aviation Authority has published its fourth annual report on the disability access of 31 of the UK’s largest airports with 14 airports rated as ‘Very Good’ and 16 achieving a ‘Good’ rating.

In total, there were a record number of 3.7 million requests for assistance at UK airports in the latest year – a rise of over 80% since 2010, and for the first time since reporting began, no airports were classified as ‘Poor’.

The CAA’s accessibility report assessed the performance of the UK’s top airports between April 2018 and March 2019, with Paul Smith, Consumers and Markets Director at the UK Civil Aviation Authority commenting, “These results show significant improvements to the experience many disabled passengers faced before our reporting began.”

The report also highlights room for improvement, with research showing that nearly a quarter of disabled and less mobile passengers said they requested assistance because the airport environment was becoming more difficult to navigate.

As part of the drive for improvement, the CAA said this will be the last year the current criteria are used for the accessibility framework. Since April this year, airports have been assessed using stricter targets and so airports will need to further improve in order to retain or improve their classifications going forward.

The CAA’s Paul Smith continued: “While it is good to see the general improvements, airports will need to continue to work hard to improve, so that they are able to meet the more demanding performance standards that we have now introduced. Where we see examples of bad practice, we will not hesitate to hold airports to account and take the necessary action.”

“It is encouraging that almost all of our main airports are rated highly,” commented Aviation Minister Baroness Vere, “but there is much more to do” 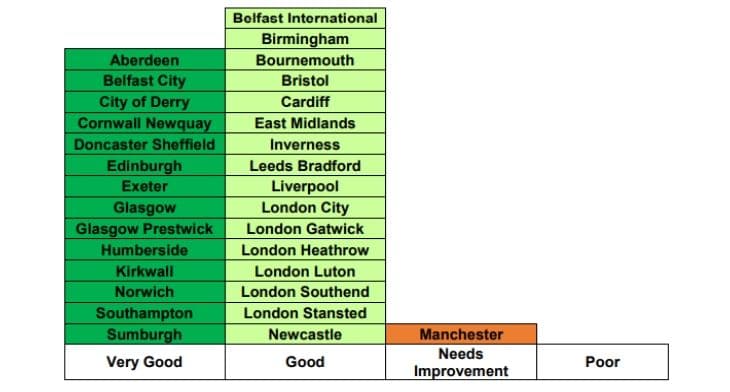 The report revealed that 14 airports have been rated ‘very good’ with several regional airports topping the list, including Belfast City, Doncaster Sheffield and Cornwall Newquay. To achieve a ‘Very Good’ classification, airports must provide high quality support on the day of travel as well as keeping in regular contact and consultation with its users.

A further 16 were rated ‘Good’, with London Stansted making the list, following a series of improvements made after receiving a ‘Needs Improvement’ rating in the previous year’s assessment.

London Stansted Chief Operating Officer, Steve Griffiths commented: “In the last year we have worked closely with our airline partners and our service provider, Omniserv, to make many improvements. Through continuous engagement and collaboration with members of our Disability Forum we have achieved a clear focus on the issues that really matter to passengers that require additional assistance and support.”

Improvements made include an overhaul of the arrivals route for passengers requiring assistance, new toilet facilities and lift and a direct corridor to immigration, aiming to provide a more seamless arrival through the terminal.

Four airports that were classified as ‘very good’ last year received ‘good’ ratings this year, while Manchester Airport was classified as ‘needing improvement’ – though this was an improvement from its rating of ‘poor’ in the previous two years. The CAA has said however, that it expects Manchester Airport to take immediate action to reverse a recent decline in performance since the end of this reporting year, in time for the next accessibility reviews.

The report found some smaller airports are investing in new technology and IT solutions, moving away from manual paper or radio-based systems, with Doncaster Sheffield and Belfast City both using new mobile applications.

The Scottish airports of Kirkwall and Sumburgh, which both received ‘Very Good’ status were also highlighted for overcoming the challenges posed by the use of small aircraft on the routes to the mainland by co-operating with airlines and taking input from local disability groups.