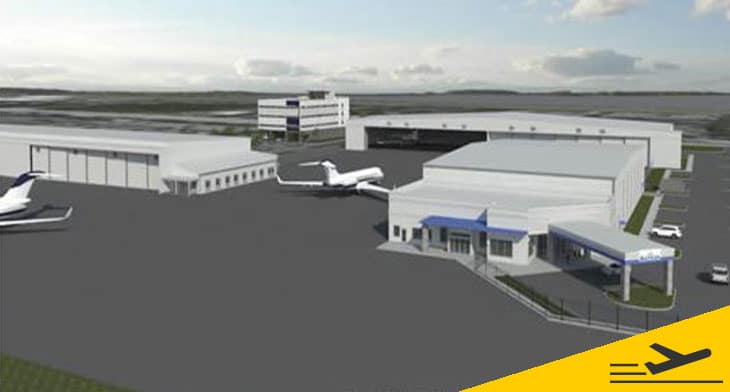 Describing the project as “extremely exciting”, Sheltair’s CEO and founder Jerry Holland said: “We are partnering with Banyan Air Service to create the type of facility that complements our respective firms; Sheltair building and managing a new state-of-the-art multi-million dollar aviation facility and Banyan’s top-of-the-line red carpet FBO services and support to a discerning customer. It represents the mutual respect two aviation services companies have for each other and a shared commitment to excellence.”

FXE serves as a gateway for executive and private aircraft travelling to and from the Caribbean, South America, and other international airports. It handles more than 1,050 aircraft and handles nearly 170,000 takeoffs and landings per year. In addition to a 180,000 square foot hangar complex consisting of eight large cabin-class-sized hangars, the airport’s new facility will include an additional 30,000 square feet of office and shop space. It will also serve as the home of Banyan’s Northside FBO terminal.

Commenting on the new complex, Banyan Air Service president Don Campion said: “Working with Sheltair on this project was an easy decision. On occasion, we may be proud competitors, but at Fort Lauderdale Executive Airport we’ve aligned our interest with one another for almost 40 years. Once again we will expand our operations and Sheltair will grow their footprint through this exciting expansion of the north side of Executive Airport. This co-operative effort enhances the airport, and most importantly, better serves our customers.”

As the FBO, Banyan will have a dedicated terminal building open 24/7 to provide FBO and line service for the tenants, which in turn, will allow customers to take advantage of the airport’s 24/7 tower and security operations.

Describing the project as a “credit to Sheltair’s ability to bring development to a city that builds value, creates jobs and continues to drive economic growth,” Fort Lauderdale mayor Dean J. Trantalis added: “This significant investment reflects the strength of our economy and the enormous confidence Sheltair and Banyan have in Fort Lauderdale Executive Airport.”

According to Todd Anderson, Sheltair’s senior VP for real estate and development, the new facility has already garnered considerable interest from flight departments and aircraft owners in need of more hangar space.

Written by: Chloe Greenbank
If you have any feedback about this article or would like to suggest a topic for future investigation, please contact us.