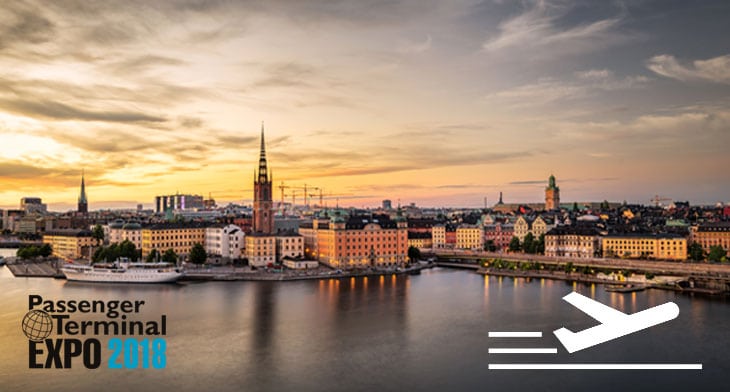 The first day of Passenger Terminal Expo 2018 drew to a close after a busy day of back-to-back conference sessions mixed in with visits to some of the 350 exhibitor stands attending this year’s expo in Stockholm.

During one of the morning sessions on ‘Airport Urbanism’, Professor Max Hirsh from the University of Hong Kong discussed how Airport Urbanism (AU) is a new people-focused approach to designing airports and to planning the urban districts that surround airport hubs.

Hirsh stressed that “airports and cities grow best when they grow together,” but he also stated that the three main barriers to AU are people being afraid of change, a lack of trust and poor coordination.

He cited Aviapolis – a business, retail and entertainment area in central Vantaa, Finland which includes Helsinki Airport as one of the most exciting AU development projects taking place today. Once an underdeveloped area concentrated on logistics, large-scale warehouses and under-utilised possibilities of housing and trade, it has been transformed into a source of activity, growth and prosperity.

Small changes with a big impact

Sticking with the subject of transformation and change, Adrian Leung, a change consultant working at London City Airport (LCY) addressed how LCY has initiated a few small changes that have had a big impact at the airport. By implementing an automated call to gate system, remodelling the West Pier and implementing ground management time stands, Leung revealed how infrastructure, technology and process combined have helped resolve serious capacity issues and improve On Time Performance (OTP), with LCY being named the UK’s most punctual airport in 2017 by the Civil Aviation Authority (CAA).

Facing challenges of a different kind, Rajender Singh Lauhauria, airports director, Airports Authority of India referenced how air passenger growth has exceeded the expectations of airport operators throughout India in the last decade.

Jay Prakash Narayan International Airport (also known as Patna Airport) in Bihar, India is a classic example of a small, old terminal with limited bays that is struggling to cope with the massive growth in passenger traffic within its existing infrastructure.

Stating that “air traffic is booming all over the world and Patna is no exception,” Lauhauria revealed that plans are afoot to develop Patna’s terminal and increase the runway as well as increase the number of aircraft parking bays and improve the layout so that aircraft can move independently of each other.

While the development is ongoing however there has been a need for careful and strategic management of operations at the airport to deal with existing passenger traffic. Simple measures such as knocking down walls and redecorating inside the terminal have created a much friendlier and more spacious environment. Temporary tents have also been erected so that passengers arriving early for their flights are kept in holding pens before they can actually enter the terminal to check in for their flight. Additional measures to help with passenger flow include bollards being installed outside the airport to tackle traffic congestion at the airport entrance and porta cabins for checked-in passengers waiting to board their aircraft.

Meanwhile one of the final conference sessions of the day focused on three new airports that are due to be built in Greenland. A new management group, Kalallit Airports was founded in 2016 to oversee the construction of the airports in Nuuk, Ilulissat and Qaqortoq.

Cited as the biggest and most costly build projects in Greelandic history the three airports, which are due to be opened in 2022, are set to transform travel and tourism in the country.

Both Qatortoq and Ilulissat are home to UNESCO world heritage sites and all three cities offer awe-inspiring scenery as well as popular tourist activities such as whale watching, dog sledding and visits to waterfalls and fjords.

The construction of the three airports is part of a government initiative to improve transport links in Greenland’s more remote regions and the new airports will also improve job opportunities for those living locally.