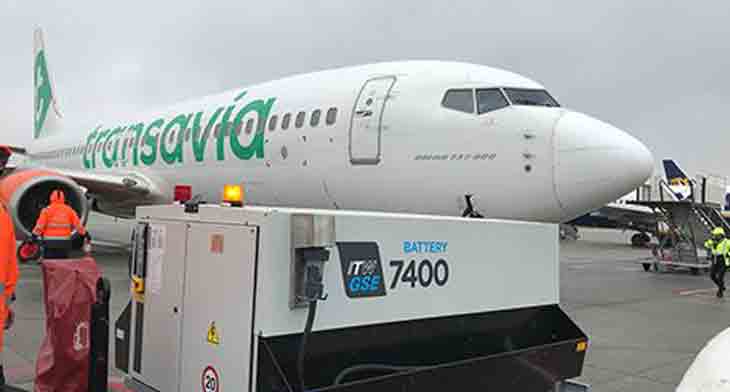 The world’s first fully electric ground power unit (GPU) is now in operation at Eindhoven Airport in the Netherlands.

Airports around the world are beginning to think greener with an increasing number of air transportation hubs interested in reducing their environmental impact. Eindhoven Airport is a case in point. It was the first airport in the Benelux to obtain the highest level of the Airport Carbon Accreditation programme – carbon neutrality – in 2013 and has grand ambitions to be one of the leading European airports in terms of sustainability.

It’s latest initiative, to put in place the world’s first eGPU, is the result of a collaboration between Amsterdam Schiphol Airport, Nissan who delivered the battery packs and ITW GSE (a leading supplier of Ground Power Units), who delivered the state-of-the-art converter and put it all together. In addition, Viggo Eindhoven Airport provided input on the functional specifications of how to use the GPU in daily operations.

The battery-powered unit has been designed to help airports reduce their carbon footprint by replacing diesel-powered GPUs with clean eGPUs.

The 7400 eGPU was first used to supply a 737-800 from Transavia with clean power at Eindhoven Airport earlier in October, following months of design works, development and testing. The unit is now in daily operation at the airport. Key features include: zero noise; built-in redundancy so if one battery pack fails others take over; a reduction in CO2 by 90% and the NOx emissions by 95% compared to diesel-driven GPUs; and the ability to be recharged from any 50/60Hz socket.