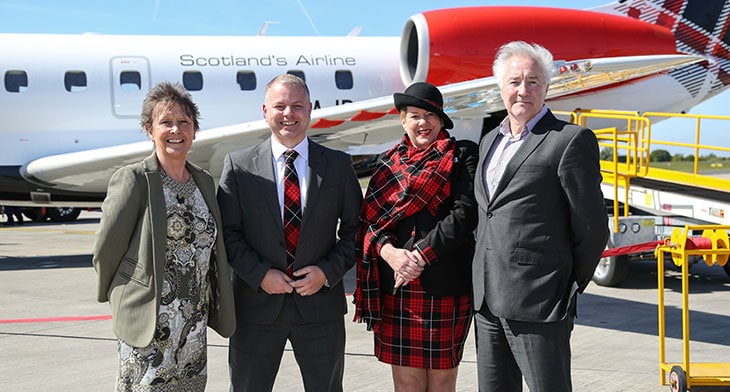 The Glasgow-based regional airline, Loganair celebrated its inaugural flight between London Southend and Aberdeen in North East Scotland on Monday 13 May.

Providing a major boost for connectivity with Scotland’s oil and gas capital, the new business focused schedule follows a period of overall reduction in London’s airlinks with the Scottish hub.

The airline’s schedule allows passengers flying from Southend to make the most of a full working day and even week in the ‘Granite City’ with three direct flights to Aberdeen each way every weekday in addition to Sunday services. Flights will be operated on Loganair’s Embraer 145 regional jet aircraft and passengers flying to Aberdeen will be able to connect onwards with Loganair to Orkney and Shetland.

“Air connectivity with London is incredibly important for the North East of Scotland where there has been significant capacity reduction to other London airports of late,” said Loganair’s managing director, Jonathan Hinkles. “We’ve specifically created a schedule which is optimum for those travelling for business during the week, with day-return schedules.”

He added “It is an ideal partnership, bringing together the European Regions Airline Association’s Airline of the Year and Which? Magazine’s Best Airport in London, working in tandem to provide year-round services from Aberdeen with an entirely new offering for our customers.”

Denise Rossiter, Chief Executive of Essex Chambers of Commerce, said “I am delighted to see the launch by Loganair of this new route from London Southend to Aberdeen. Both areas are highly entrepreneurial and this new service will be of real benefit to businesses in Essex and Aberdeen. I wish them well for the future and look forward to trying it myself.”

Glyn Jones, CEO of Stobart Aviation, said: “ Aberdeen is a fantastic addition to London Southend’s extensive route map and we’d like to welcome the passengers aboard this inaugural service to Scotland’s North East. With our own railway station just 100 paces from the terminal door, up to six trains an hour into London and our award-winning customer service, we expect these new routes to prove very popular with customers flying to and from the Granite City.”