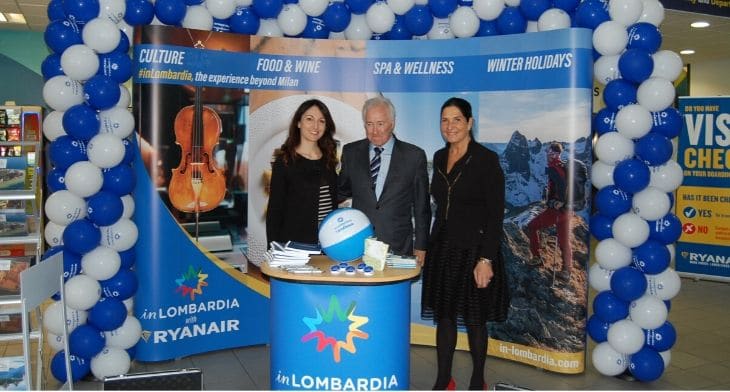 Lombardy region teams up with Ryanair in prom..

To promote the Lombardy region in Italy, Ryanair and Regione Lombardia launched a series of joint promotions in the UK market. The ‘Try Somewhere New in Lombardia‘ campaign started with a consumer-focused event at London Southend Airport on 15 November.

Commenting on the joint promotion being held at London Southend, Glyn Jones CEO of Stobart Aviation, said: “The Ryanair service to Italy’s second city, Milan, has already been a great success and we anticipate even more passengers will want to explore this fantastic region of northern Italy. We also hope that travellers from Lombardy will enjoy South East England. Central London is under an hour from London Southend, thanks to our quick and easy rail links to the UK’s capital city, while Southend and Essex have so much to offer.

Alongside a press conference hosted by Ryanair and London Southend, the launch event also featured an Instagram contest and distribution of information about the Lombardy region.

Chiara Ravara, head of internal communications at Ryanair said: “Ryanair is delighted to launch its first UK event, in cooperation with Regione Lombardia, to promote the Lombardy region.” She added: “We are proud to use our extensive network and low fares to promote a region as exciting and rich as Lombardy. We are continuing to grow at our Lombardy airports (Milan Bergamo and Milan Malpensa), granting direct access to the whole region – creating tourism and jobs all year round. We are happy to be here at London Southend Airport, a few months after the launch of the base, which represents an important connection between London and Milan and their respective regions.”