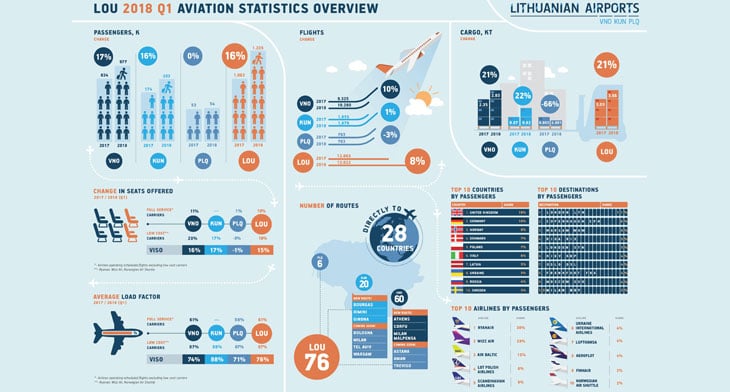 Lithuanian Airports have seen a rise in passenger and flight numbers in the first quarter of 2018, with all three airports (Vilnius, Kaunas and Palanga) serving 8% more flights and 16% more passengers compared to last year.

“The most impressive growth in the number of passengers was observed at Vilnius Airport, where it reached 17% and passenger flow surpassed 977,000. Kaunas Airport was close behind reaching a 16% growth in the same category while passenger flow in Palanga Airport remained very similar compared to the year before”, said director of Lithuanian Airports Marius Gelzinis.

In the first quarter of 2018, Vilnius Airport saw the fastest growth in the number of flights served, increasing by a tenth while in Kaunas they rose by 1%. Overall, in the period between January and March, Lithuanian Airports saw an increase of 8% in flight numbers, bringing their total to 13,000.

“Good results were influenced by the rising variety of regular flights. We are happy to offer 86 destinations from all three – Vilnius, Kaunas and Palanga – airports. Summer flight season opened at the end of March offering passengers exciting new opportunities. Vilnius Airport now operates flights to Athens and the Island of Corfu, while Kaunas Airport offers flights to Girona, Burgas and Rimini,” Gelzinis continued.

Despite the expanding route map, the most popular destinations remain the same and in the first quarter of the year, 19% of passengers in all three Lithuanian airports travelled to the United Kingdom, 10% to Germany and 8% to Norway.

London Luton Airport has remained the most popular airport among passengers travelling from Vilnius, Kaunas and Palanga with 11% of passengers choosing this destination.

More than half of all Lithuanian Airports passengers flew with Ryanair and Wizz Air airlines in the first quarter of 2018. The remaining passengers chose airBaltic, LOT, Scandinavian Airlines, Ukraine International Airlines and other carriers.