Leaders call for aviation strategy for the No..

Business and civic leaders in the North of England have called for the government to establish Northern airports as the ‘beating heart’ of the Northern Powerhouse economy, suggesting that Manchester Airport and the other gateways in the North can play a leading role in re-balancing the economy.

Lord Jim O’Neill, vice-chair of the Northern Powerhouse Partnership, Andrew Cowan, Manchester Airport CEO, Councillor Susan Hinchcliffe, chair of the West Yorkshire Combined Authority and leader of Bradford Council and Joanne Roney, CEO of Manchester City Council joined together to say that creating a “super-connected, productive and internationally competitive” Northern Powerhouse is not just important for the North, but for a balanced and outward-facing UK.

The leaders also said that direct access to the world’s most important economies is “critical” to the creation of internationally-significant centres of excellence in fields such as advanced manufacturing, technology, energy and life sciences in the North. 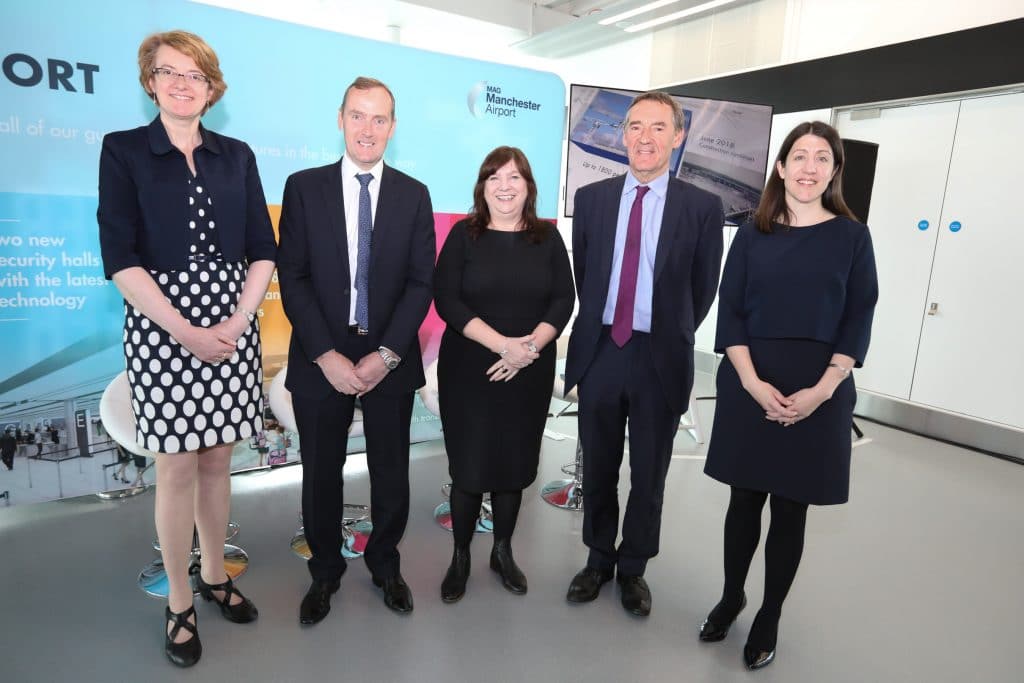 Leaders spoke ahead of the close of the consultation on the UK government’s aviation strategy green paper, suggesting that securing direct links with high-growth economies (as opposed to connections through domestic or oversea hubs) is what will do the most to increase trade, investment and educational links to and from the North.

Lord Jim O’Neill, vice-chair of the Northern Powerhouse Partnership, said: “Access to the world’s most important markets is key to the North realising its true potential. Across the Northern Powerhouse, we are seeing significant private sector investment in airports, demonstrated nowhere better than here at Manchester Airport.

“That ambition should be matched by government support for maximising the potential of Northern airports through the Aviation Strategy process.”

He added that major investment is needed to better connect the North’s economic corridors, attracting investment, creating jobs “as well as attracting overseas organisations to discover a connected Northern Powerhouse through Manchester Airport, which with flights already to destinations like China, Hong Kong, Singapore and Ethiopia, is key.”

Manchester Airport recently opened its new pier on 1 April, the first phase of its wider £1bn investment to be delivered. The transformation of the airport will include growing Terminal Two by more than 150% to become the airport’s primary terminal. Leaders suggest that this investment and spare capacity demonstrate that Manchester Airport, along with the other gateways in the North, have the capability to play a leading role in “rebalancing the economy” and taking pressure away from London and the South East.

In order to maximise the potential of Manchester Airport and ensure the benefits of international connectivity reach throughout the North, the leaders suggest the key will be “dramatically improved surface access” through schemes such as the Northern Powerhouse Rail (NPR). The NPR will reduce journey times between the airport and the North’s major cities, nearly trebling its public transport catchment area as well as helping to attract up to 10 new long-haul routes in the process.

Lord Jim O’Neill added that due to transport barriers it can take an hour and a half to travel from Leeds to Newcastle, which would be “significantly” reduced under NPR.

Cllr Susan Hinchcliffe, chair of the West Yorkshire Combined Authority and leader, Bradford Council, said: “Linking up the North’s airports, together with our rail and road connectivity, is the missing piece of the Northern Powerhouse jigsaw.

“That is why Lord O’Neill and fellow parliamentarians wrote to the Chancellor last week, seeking meaningful commitment to Northern Powerhouse Rail with a city centre station in Bradford to link to Manchester Airport, Hull and Sheffield as part of the £120bn package of infrastructure investments in strategic and local transport schemes needed to deliver a once-in-200-year opportunity to rebalance the economy and narrow the North-South divide.”

Andrew Cowan, Manchester Airport CEO commented: “Manchester Airport is a national asset, providing the north with direct connectivity to more than 210 destinations around the world. This list includes nine of the UK’s 10 biggest export markets, our largest source markets for inward investment and international centres of excellence in the sectors the North has particular strength in.

“We are clear that Manchester Airport has the potential to play an even greater role in driving growth across the North and rebalancing the UK in the process. That is why we are investing more than £1bn in transforming our facilities and laying the foundations for us to connect the north to even more international destinations,” Cowan adds.

“It is pleasing to see Manchester Airport’s national significance recognised in the Aviation 2050 Green Paper and we look forward to working with government, and our partners across the North, to identify and deliver the measures that will unlock our full potential for the benefit of the region, and the UK as a whole. That includes through schemes like HS2 and Northern Powerhouse Rail, which will combine with our own investment to make the North one of the world’s most connected regions,” he concluded.