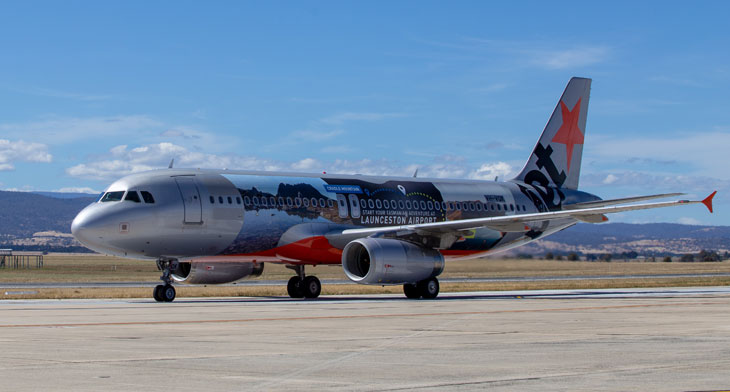 Launceston Airport, the gateway to Northern Tasmania, has launched a campaign to promote the region to domestic travellers with the commissioning of a new Jetstar aircraft livery.

Unveiled on an aircraft flying between Melbourne and Launceston airports, the livery features top tourism attractions in Northern Tasmania, such as Cradle Mountain, Wineglass Bay, Cataract Gorge and the Bay of Fires, that Launceston Airport is the closest jet airport to.

“I’m thrilled to showcase Launceston and the region in such a grand way, highlighting the many natural attractions that are in close proximity to Launceston Airport,” said Launceston Airport general manager Paul Hodgen who added that the aircraft created an ‘unrivalled opportunity’ to promote key local tourism attractions.

“The campaign is part of our strategy to encourage domestic travellers to fly into Launceston as the tourism gateway to Tasmania, before they continue on to explore the rest of the state, putting Launceston Airport firmly “on the map”.

The scenic images on the aircraft exterior have also been replicated throughout the interior, on tray tables and overhead cabin storage. A travel guide of Northern Tasmania has also been developed for in-flight reading featuring local recommendations and tips.

Tourism Northern Tasmania CEO Chris Griffin said “the investment by Launceston Airport should be applauded in its focus to ensure every great Tasmanian holiday starts in the North, especially as we enter into the cool season beyond the Easter long weekend.”

To celebrate the livery reveal, passengers flying on the aircraft’s first trip to Launceston were treated to local produce and gifts on arrival at the airport.

Nigel Fanning, Jetstar head of product said the airline is excited to work with Launceston Airport and Tourism Northern Tasmania to promote the city and the state, “We’ve been flying to Launceston for almost 15 years. Last year, we carried around 800,000 customers to and from Tasmania with around two thirds of those fares sold for under $100”

The Launceston-themed Jetstar Airbus A320 will be operating until the end of July.