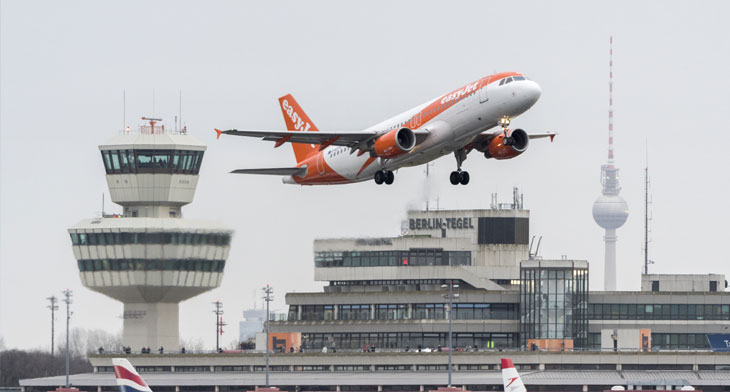 easyJet has launched its inaugural flight from Tegel Airport in Berlin and its first domestic flight in Germany.

The airline has announced 19 new routes from Tegel Airport, including four domestic routes between the capital and Düsseldorf, Frankfurt, Munich and Stuttgart up to eight times a day.

In the coming months, the airline will also launch flights to 15 international destinations, including flights up to five times a day to cities like Vienna and Zurich and regular connections to leisure spots like Mallorca.

Combined with the airline’s existing operation at Berlin Schönefeld established in 2004, easyJet will fly 18 million passengers to and from Germany once the Tegel operation is fully established to 116 destinations, basing 37 aircraft and employing up to 1,700 people across the country.

Thomas Haagensen, country director for Switzerland, Germany and Austria, said easyJet is excited to be growing in Germany. He added: “Our new flights from Tegel will be particularly attractive for business passengers, offering early morning departures to enable day trips to key destinations in Germany and the wider DACH region.

“We look forward to combining all our Berlin operations into Brandenburg airport when the airport opens in October 2020. When we do so it will be easyJet’s second largest base, twice the size of any other easyJet base and will provide the platform for further easyJet investment.”

Rainer Bretschneider, state secretary for airport coordination in the Brandenburg State Chancellery commented: “After nearly 14 years of involvement of easyJet in Schönefeld, the added incorporation of Tegel in the flight plan represents a further strong commitment for the capital region of Berlin-Brandenburg. The new easyJet base strengthens the location, provides attractive connections and ensures important work job opportunities in the capital region.”

Chairman of the board of Berlin Brandenburg airport GmbH, Professor Engelbert Lütke Daldrup, said the expansion makes Tegel Airport and Schönefeld Airport the most important location for the airline outside of the UK, adding: “The decision made by easyJet shows how important the region is for the European aviation industry also in the future, and demonstrates the importance of the airports as drivers of growth in Berlin and Brandenburg.”

The airline plans to announce additional new routes from Tegel for the summer season starting 25 March 2018.