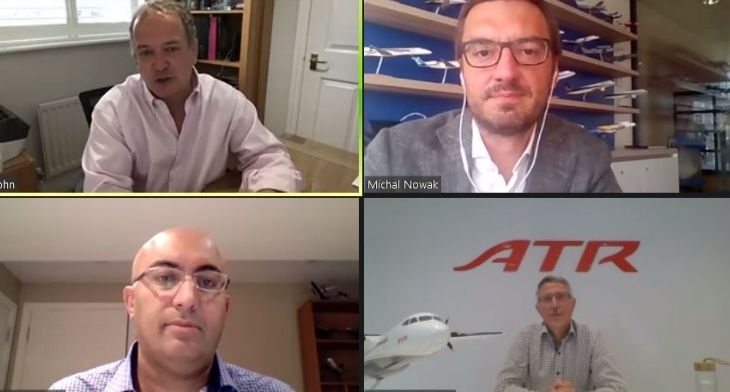 How regional aircraft are helping to rebuild the aviation industry

There are many reasons why we can still be optimistic about the future of regional aviation. So stated three panelists representing Embraer, De Havilland and ATR as they discussed how choosing the right aircraft type can help rebuild the aviation industry during AviaDev Europe’s online conference on Wednesday 16 September.

“We’ve all had to adjust to manage through the pandemic,” said Sameer Adam. “We’ve managed to work with our customers throughout the crisis to manage demand and to retain our staff and resources in order to manage production,” he added.

Adam also noted that all three regional players are working hard to help stimulate the market again by ensuring that regional carriers can resume operations as cost effectively and efficiently as possible even with low passenger numbers. One of De Havilland Canada’s most recent deliveries was in June, when it delivered a DASH 8-400 to TAAG Angola Airlines (TAAG) to support the development of the carrier’s domestic and regional network in and around Angola.

Amid the current health restrictions Clemente Affinito underlined how ATR has developed a remote delivery process to support customers’ recovery efforts. “There are challenges but we are working hard to overcome those,” he said.  Highlighting how ATR’s versatility and flexibility have been key to its stability, Affinito referenced how his company has seen three new ATR operators (Air Leap, Windrose and Lubeck Air) enter the market in Europe during the peak of the COVID pandemic.

Meanwhile Embraer’s Michael Nowak pointed out that the number of aircraft being delivered currently is not necessarily a measure of success. “We are in a tough situation, when forcing delivery to a customer is not necessarily the best decision. It’s about focusing on the longer term plan.”

Nowak believes that, “while hub airports are under significant pressure, and there will be a  shift towards point to point connectivity, this won’t be drastic and regional connectivity will continue to face its own challenges.” He also emphasised that with the sustainability debate more prevalent than ever, regional airlines and manufacturers need to consider how they will face greater competition from other more environmentally friendly transport options on certain routes.

Adam added that manufacturers are learning to adapt to the constantly evolving situation all the time. De Havilland Canada has found that around 8% of routes being flown today are new for regional carriers.

What’s more the passenger demographic and demand is changing. “Does the average passenger still have the income and ability to travel as they did before?” he asked. He also stated that passengers are less likely to want to travel if it means connecting through another major hub where they run the risk of increased testing and delays etc.

All three panelists concluded by warning that while we can still unfortunately expect to see the demise of some airlines and small airports in the coming months, the overall outlook for the future of the domestic and regional aviation sector is optimistic.

Affinito said he was confident that, “ATR will be back up to the same production levels as before the crisis in the next 24 months.”

Nowak meanwhile underlined that Embraer’s value proposition hasn’t changed and the manufacturer’s “narrative is now more relevant than ever,” as he pointed out, “It’s now about  supporting airlines with suppressed demand.”

And whether it’s a second wave of coronavirus or economic decline that will continue to impact air travel, Adam agreed that tough decisions are now having to be made to rationalise aviation’s rapid growth in recent years. But he also urged, it’s about playing the long game, saying, “You need to look to the horizon. It’s about coming out of the COVID pandemic having made a difference.”