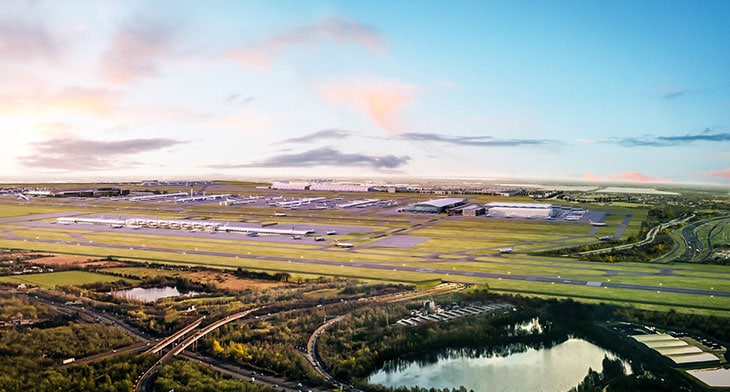 Following years of debate, MPs in the UK have voted overwhelmingly in support of the government’s proposal to expand Heathrow Airport with a third runway. Votes were cast late on Monday 25 June, and resulted in a landslide victory for the expansion plans, with the House of Commons supporting the £14 billion project 415 to 119.

Nick Barton, CEO of London Luton Airport, described the vote as a “welcome sign of the Government’s commitment to providing much needed aviation capacity in the South East.” He added it is also “an important step forward which now needs to be backed up with swift and decisive action. This means ensuring all of London’s airports can make the best use of their existing capacity by improving links between rail and air, and by modernising the UK’s airspace.”

Heathrow’s expansion plans have been given the backing of regional airports across the UK, who wrote a letter in advance of the House of Commons vote collectively outlining their support for the third runway.

Neil Pakey, the chair of the Regional and Business Airports Group (RABA), told Regional Gateway: “RABA firmly believes the UK needs its own globally competitive hub airport and the whole of the UK needs to be connected to it, because we cannot rely solely on access to hubs elsewhere – many of whom are also becoming congested – to provide the international connectivity that an open trading economy, like that in the UK, needs.”

Before building works can commence Heathrow now has to prepare an application for development consent, which will need to comply with the Government’s rules and targets on pollution, as well as connecting flights to UK regions and compensation to locals.

Pakey underlined that RABA’s support for an expanded Heathrow “has always been dependent on the delivery of sufficient slots for regional airports, that are currently unconnected to Heathrow, being made available in perpetuity and at an affordable cost.”

The Government has taken full account of regional interests, stating that it expects up to 15% of slots (the equivalent of 53 pairs of slots per day) from a new runway to facilitate domestic connections across the UK. It also requires Heathrow to demonstrate it has worked… to develop new domestic connections, including to regions that are currently unserved.

Heathrow CEO John Holland Kaye has said he wants to see “all parts of the UK” connected to his airport. But Pakey warned that this will require all of those 53 slot pairs to be allocated to new airports, and not those that already benefit from access to the national hub. “There will be plenty of scope in the remaining 245,000 additional slots the third runway will create for those airports to secure competitors for their current incumbents,” he added.