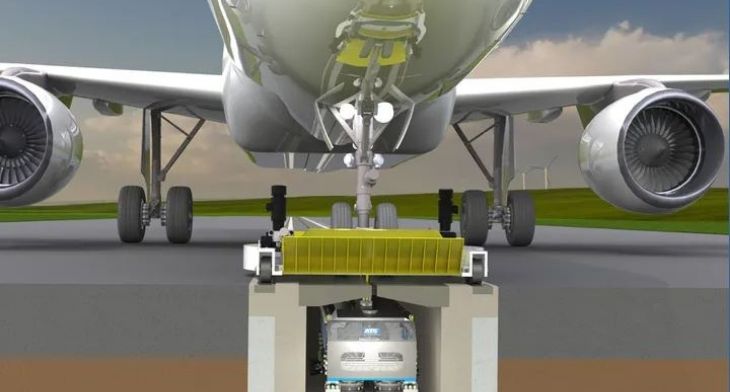 With aviation contributing around 3% of global carbon dioxide emissions in 2019, this figure is expected to increase to 22% by 2019 according to a report titled Decarbonising Aviation: Cleared for Take Off, published by Shell in association with Deloitte.

A new system from Oklahoma-based Aircraft Towing Systems World Wide (ATS) is set to tackle this issue from the ground up by helping airports become greener as well as helping airliners reduce fuel consumption and carbon emissions. It has been showcasing its concept this week during the GSE Expo that uses electric tow vehicles that run along below-grade tracks on airport ramps and taxiways to pull aircraft from the taxiway to the terminal. A prototype of the technology is currently being installed at the Ardmore Industrial Airpark in Ardmore, Oklahoma and is due to be completed before the end of the year.

By moving aircraft using electric tow cars, the safety-enhancing, fuel-saving and environmentally friendly technology not only saves fuel but slashes emissions and reduces noise pollution, as pilots can turn off their engines. The system also reduces collisions and incursions because it follows a track as aircraft are moved to and from the terminal.

Based on ATS World Wide’s calculations if the ATS system was installed at Chicago O’Hare International Airport, airliners would be able to save $491 million in fuel consumption per year. If O’Hare were to increase its landing fees to equate just 50% of the fuel savings, O’Hare could establish a way to cover the costs of the ATS installation and ultimately generate revenue for the airport. Airliners would be happy because they’d still be benefitting from close to $250 million in fuel savings. The carbon emissions reductions associated with the lower fuel usage will also enable O’Hare to earn emission credits that could then be sold on global emission markets; based on current prices ATS estimate O’Hare being able to generate and additional $3.2 million in revenue from the sale of these credits.

According to ATS, it would not have been able to develop the technology if it weren’t for advances in electric motor development; their small sizes today can easily be integrated within the underground channel and they are powerful enough to tow aircrafts.