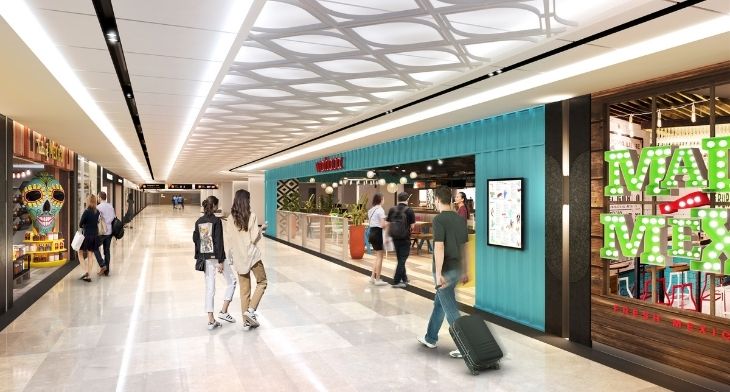 Plans to create the ‘best airport in Mexico’ include an additional runway and new terminal building, as well as, in the short-mid term a radical new $302 million redesign of the commercial space in the existing facility which is expected to be open in 2023. The Design Solution has been appointed to deliver the redesign with the new space due to open on a phased basis over the next two years. It is working alongside the project’s commercial consultants, Pragma Consulting, in fulfilling the approved proposal.

The new plan for the commercial space optimises previously under-utilised areas and creates a new vibrancy to the passenger experience with a significantly enlarged commercial zone. The two security areas are retained and passengers are now drawn towards the airside heart of the terminal, a newly revitalised area overlooking the apron, surrounded by a mix of retail, bars, restaurants and other customer service facilities.

“Our first task was to rationalise the passenger flows through the terminal to create an intuitive route in the airside commercial area. With this approach, passengers have much more direct engagement with the greater exposure given to stores, restaurants, bars, pop-ups and seasonal event experiences,” explains Graeme Johsn, Director of the Design Solution. He also referenced the challenges associated with transforming older terminals and especially those that were built before commercial revenues became so important.

“These new designs will create a world class facility and passsenger experience fitting for GAP’s ambitions to transform Guadalajara International Airport and to maximise its commercial potential. ” 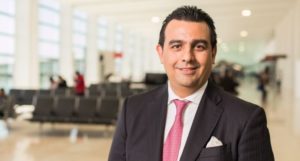 Raul Revuelta, Chief Executive Officer, Grupo Aeroportuario del Pacifico (pictured) added, “We first worked with The Design Solution at Sangster Montego Bay Airport in Jamaica, one of our other operated airports. Shortly after, we appointed them to work at Los Cabos Airport in Mexico and now on to Guadalajara. We have worked together as a team over many months to create something we believe will transform the terminal, both in terms of bringing passengers the best travel experience as well as growing our commercial offer. In the core airside commercial area, we currently have 5,700 sq. m. and that will increase to 7,250 sq. m.”

He added that while the pandemic means the implementation phase of the plans will likely take longer than originally hoped, “we look forward to a phased approach to achieving this vision.”

One of the key areas of the redesign is the flat roof canopy, located outside the centre of the terminal building, over an expanded baggage area. The proposal is to transform this into a signature feature of the terminal, with an external garden terrace, surrounding an Agave-inspired architectural shade pod, offering informal seating areas, planting and a dining space. Heavily planted areas include trees to complement the minimalistic concrete benches with low level under-lighting, combining to create a light, contemporary and natural landscape look and feel. The exterior aesthetic is further enhanced with the application of resin-bound aggregate floor finishes and warm natural materials.

Meanwhile, a large rotunda space directly after the duty free store, will enable passengers to pause, check flight information and plan how to spend their time before proceeding to their departure gate. a large aura formation of pendant lights, made from a Mexican porcelain enamel and designed by a local contemporary design studio is suspended within the space creating a striking statement with a local sense of place.