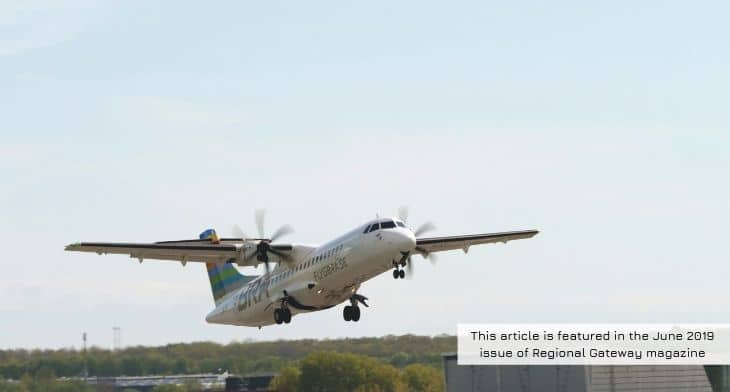 Decarbonising aviation can only be achieved when all industry players work together, as Chloë Greenbank discovered on a flight from Halmstad City Airport to Stockholm Bromma.

Even the weather was perfect on Thursday 16 May when, after months of planning, a number of companies from across the aviation sector rose to the challenge of turning a typical weekday service from Halmstad City Airport on Sweden’s southwest coast to the capital’s Stockholm Bromma Airport into the ‘Perfect Flight’. The voyage marked the first time that every element in the management process on a regional flight had been optimised to keep carbon emissions to a minimum. With Sweden having introduced an aviation tax designed to address greenhouse gas emissions and the country aiming to be carbon neutral by 2045, it provided the ideal host country for the project. Owned by the local municipality, Halmstad City Airport was one of the first airports in Sweden to offer biojet fuel to its customers in 2017. And in order to achieve its ambitious plans to be fossilfree by 2030, the airport’s ground vehicles are all 100% fossil-free, it has 233 solar panels on its terminal roof producing 53,000 kWh per year, LED lighting throughout the terminal and by autumn this year on the runway too, as well as electric car charging points and bicycles available for passengers to hire. In addition, Air BP’s operations at Halmstad City Airport have been certified as carbon neutral since 2016. Braathens Regional Airlines (BRA) used one of its ATR 72-600 turboprop regional aircraft, which according to ATR produces 40% fewer carbon emissions per trip compared with similarly sized regional jets, saving 4,000 tonnes of carbon emissions per aircraft per year. In addition, BRA offers all its passengers the choice of fossil-free biofuel when booking their air travel.

A key element of the flight was the fact that it was powered by sustainable aviation fuel (SAF), supplied by Air BP and produced by Neste – the largest producer of renewable fuel refined from waste and residues. Produced from nonpalm renewable and sustainable raw materials, the SAF fuel supplied can produce up to 80% fewer emissions over its life-cycle compared with conventional jet fuel. Made by blending conventional kerosene (fossil-based) with renewable hydrocarbon, the SAF used on the Perfect Flight was a blend of around 40% renewable fuel (produced from used cooking oil feedstocks) with 60% conventional fuel. Commenting on the broader adoption of sustainable aviation fuel, Andreas Teir, Neste’s vice-president of development/ renewable products, said its essential that all aviation industry players work together. “I’m a stubborn optimist and today we witnessed the results of a fruitful collaboration,” he said. “It’s about co-operation, not competition. Decarbonising aviation calls for all stakeholders to come together and to be united in their will to overcome obstacles.” Meanwhile, Anna Soltrop, BRA’s head of sustainability, enthused that while the aim is to “continue flying perfectly” in the future, “to achieve this, it is important that we can access sustainable fuel in sufficient quantities and at the right price.”

Captain Johan Molarin (pilot of the Perfect Flight) is in agreement with the need to increase production of SAF, but he also highlights that pilots also have a key role to play in achieving the aviation industry’s carbon- reduction goals. “We need to think about what we are doing now, not just about the future. Using efficient aircraft where possible is another integral piece of the puzzle, but efficient flight planning also has to be taken into consideration. “Everything from planning the most direct route, to cruising altitude, descent speed and gravity optimisation are integral to achieving the perfect flight.” He also noted that the Perfect Flight had a 46% reduction in CO2 emissions – which is believed to be a first for a commercial flight. While admitting that sometimes elements of flight planning are out of a pilot’s control, such as air traffic control restrictions and adverse weather conditions, “but things such as the type of aircraft that’s flown and the fuel that’s used to power a flight are all things we can control.” Talking after the Perfect Flight had landed at Stockholm Bromma Airport (which is one of five airports in Swedavia’s portfolio to have trialled the use of biofuel), Fredrik Kampfe, director industry affairs, Swedish aviation industry group, said: “It’s not how, its wow! The Perfect Flight has delivered results in terms of achieving significantly lower carbon emissions.” It also proves how much can be achieved through collaboration, as while sustainable aviation fuel currently offers the only viable alternative to fossil liquid fuels for powering aircraft, aviation needs to adopt multiple solutions to ensure greenhouse gas emissions continue to be reduced.