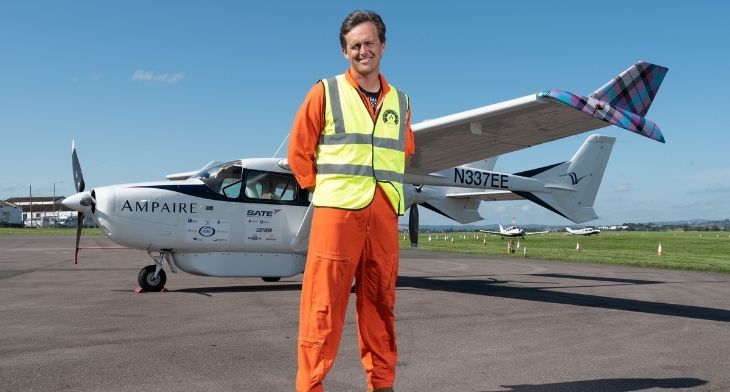 A pioneer in hybrid electric aircraft technology, Ampaire has this week launched demonstration flights between Exeter Airport and Cornwall Airport, to showcase the benefits of sustainable aviation, by driving down costs and emissions on short regional routes.

“We are incredibly excited and proud to be supporting this initiative and to see Exeter Airport play a central role in demonstrating and developing this important technology,” said Stephen Wiltshire, Operations Director, Exeter Airport.
Flying between the two regional hubs, which are located 85 miles apart on a combination of battery and piston power, Ampaire’s flights are part of a series of government-backed trials aimed at moving the UK towards green aviation.

Demonstration flights will be operated by its Electric EEL technology aircraft. The modified US-built six-seat Cessna 337 Skymaster, features a battery-powered electric motor at the front and conventional combustion engine at the rear, enabling a reduction in emissions and operating costs by as much as 30%.

Ampaire is currently developing hybrid electric power train upgrades for 9 to 19-seat regional aircraft, including the Cessna Grand Caravan and Twin Otter. Last year the company received £2.4 million from the UK Research and Innovation’s (UKRI) £30 million Future Flight Challenge towards the consortium’s £5 million 2ZERO (Towards Zero Emissions in Regional Aircraft Operations) programme. The programme involves the operation of hybrid electric aircraft on regional routes in South West UK, together with a study of the ecosystem required to enable the future of electric aircraft within existing airport and airline operations.

The EEL will be based at Exeter Airport from where it will fly on two CAA-approved routes, taking it over the dramatic expanse of Dartmoor, or on a more southerly flight path along the stunning Devon and Cornwall coastline, before touching down at Cornwall Airport Newquay.

“The EEL flies very much like a conventional aircraft, with some new instrumentation for power management,” said demonstration pilot, Elliot Sequin. “We have flown it nonstop from Los Angeles to San Francisco and now the length of the UK without any difficulty. It is the forerunner of a new generation of efficient aircraft that will be easy to fly for pilots and cost effective for airlines.”

Pete Downes, Managing Director at Cornwall Newquay Airport commented: “We’re passionate about being part of the solution in terms of the sustainable future of aviation and are incredibly proud to be partnering with Ampaire in this exciting project. At a time when domestic regional travel is stronger than ever, it’s vital we work together to find the most sustainable way to deliver this in the future.”