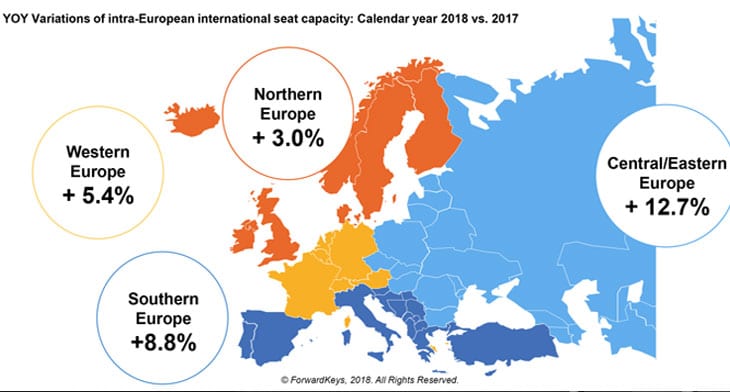 Regional airports across Europe are taking off in popularity, according to FowardKeys. The travel intelligence company predicts future travel patterns by analysing 17 million booking transactions a day.

The World Travel & Tourism Council (WTTC) supports these findings, confirming that the direct economic contribution of European regional travel was up 3.8% in 2017. Impressive when you factor in that the overall GDP growth of the EU was only up 2.3%.

While major events, such as the 2018 FIFA World Cup in Russia account for some of the boost, other long-term factors credited with this growth include the growing popularity of air travel, increasing pressure on major airports and the success of low-fare airlines.

Eyes on the East

In addition to Russia, Georgia, the Ukraine, Poland and Latvia were the top growing countries this year, while in southern Europe, Turkey and Greece both bounced back.

In terms of intra-European capacity, regional airports across Europe showed significant growth. Airports such as Aarhus (in Denmark), Bordeaux (in France), Ufa (in Russia) and Antalya (in Turkey) are top performers within their respective sub-regions. And following the success of the World Cup, Russia has ambitious expansions plans for its regional airport network.

The report also references the increase in seat capacity to long-haul destinations from Europe, which is up by 9.1%. And, it’s the smaller European airports where capacity in this market has grown quickest.

“The regional expansion trend seems irresistible and many European destinations are already facing the problems of ‘overtourism’, as seen in Barcelona and Dubrovnik. There needs to be combined efforts and vision from airports, airlines and destinations simultaneously to capitalise on the economic benefits and manage the growth in a sustainable way.”

Interestingly, Jager also noted that ForwardKeys findings show that in Valencia, where the company is headquartered, residents’ flight searches reveal the most popular destinations being searched but not yet served from the Spanish city.

Top of the list are: Athens in Greece, Florence in Italy, Kiev in Ukraine and Stockholm in Sweden.

“We have observed thousands of searches for each of these destinations this year. That shows how much people want to depart from their local airport and they are constantly seeking new destinations. It’s both a challenge and business opportunity that needs to be met,” he concluded.