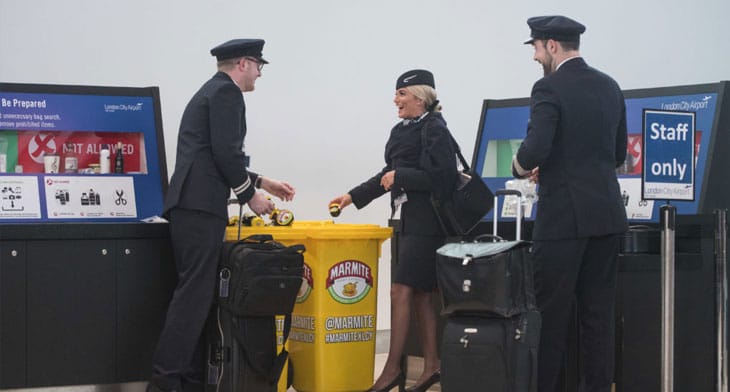 Editor’s comment: You either love it or you hate it

I am most definitely in the ‘lovers’ camp when it comes to Marmite, the deliciously dark and sticky spread made from yeast extract. And I am definitely prone to taking a little jar with me when off on my travels. So, it was no big surprise to learn that it has been revealed as the most confiscated food brand at London City Airport.

The airport has reported a 50% uplift in Marmite confiscation at airport security during the first three months of this year – from four to six jars a day.

“With 4.8 million passengers travelling each year through London City Airport, it’s little surprise that Marmite is such a treasured item and demonstrates just how loyal Brits are to their favourite brands,” said Ian Cowie, director of Customer Operations at London City Airport.

To tackle the sticky issue of confiscated jars, London City held a Marmite amnesty at its security gates on Tuesday 30 April. It coincided with the launch of a limited-edition mini Marmite jar, which was unveiled by British Airways to celebrate its centenary year and is conveniently sized to fit within the liquid allowance at 70g.

The amnesty at the London hub provided customers with the chance to swap their contraband jars of Marmite for the travel-friendly version. The majority of confiscated food items at the airport are donated to local charity, Community Food Enterprise. A ‘Mail and Fly’ service is also offered should passengers wish to post confiscated items to a specified address.

Other branded items that failed to make it past the airport’s security gates were Harrods jams and spreads as well as Lyle’s Golden Syrup.

It would seem that Brits clearly can’t be without their favourite branded food items when heading abroad. And I shall certainly be investing in some mini versions of my mate Marmite to stow away in my hand luggage for the next trip!