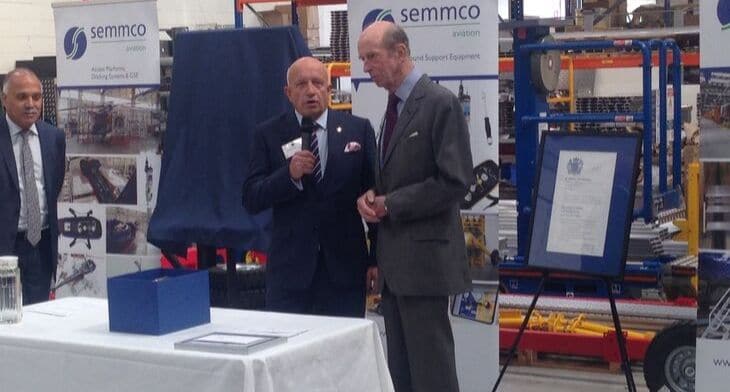 Airports in southern Africa might have been on high alert this week with the comings and goings of the Duke and Duchess of Sussex and their royal entourage. But back on home turf, Regional Gateway has enjoyed a royal visit of its own.

This week I attended the presentation of the Queen’s Award for Enterprise: International Trade 2019 to Semmco – a design and engineering company offering a range of ground support equipment for the transport sector, including aviation. HRH the Duke of Kent presented the award to Stuart McOnie, Semmco’s managing director, and his team on Wednesday 2 October at the company’s UK headquarters in Woking, Surrey. The award was given in recognition of  overseas sales growth over the past three years, which has been driven by Semmco’s production facilities in the Middle East and US, that supply a number of airlines such as JetBlue, Etihad and American Airlines.

Semmco will be showcasing its ground equipment at inter airport in Munich next week. The Regional Gateway team will also be attending and reporting from the exhibition (Hall C6, booth 2058). So drop me an email if you have news from the event you’d like to share.

Elsewhere it’s been a challenging week for airports with the demise of Slovenian regional airline Adria Airways marking the fourth airline bankruptcy in September, after Thomas Cook Airlines, Aigle Azur and XL Airways. Ljubljana Jože Pucnik Airport has reportedly lost almost half of its route network after its dominant carrier (Adria Airways) announced it has cancelled all scheduled flights. A report by travel analytics firm ForwardKeys shows that Adria Airways accounted for 59.7% of international seat capacity to Slovenia and the airline’s bankruptcy has resulted in the loss of direct-flight connections with two dozen countries, including the Czech Republic, Spain and Switzerland. While other airlines are expected to fill the gaps left by the Slovenian carrier, how long it will take to return to the previous level of connectivity remains to be seen.

Manchester Airport meanwhile is behind a dedicated recruitment drive this week for former Thomas Cook employees, of which around 3,000 are based in Greater Manchester. The airport’s CEO, Andrew Cowan, has urged companies and organisations at the Manchester hub to get involved and offer employment, as well as advice and training opportunities.

Commenting on the wider impact of the collapse of the 179-year-old business, Cowan said: “That is why we are determined to come together as an airport community and to work with our partners in the city and wider region to do all we can to help those who have sadly lost their jobs.”

It’s a welcome show of solidarity in what is proving to be a challenging year for the aviation industry.