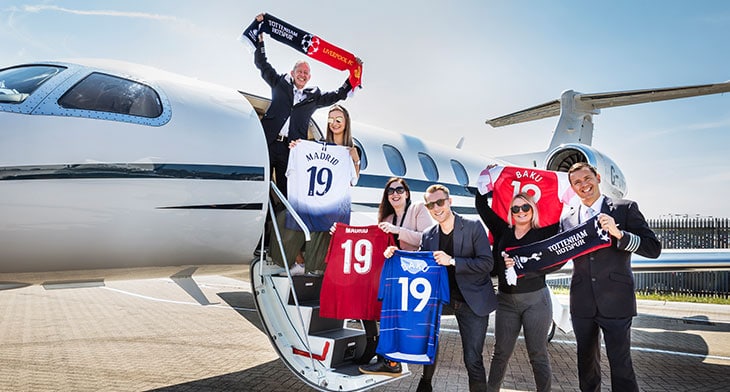 Excitement is literally hitting fever pitch ahead of this weekend’s UEFA Champions League final, which will see Tottenham Hotspur and Liverpool, two premier league teams from the UK, competing for European footballing glory at the Wanda Metropolitano Stadium in Madrid on 1 June.

But, with football fans struggling to secure travel and accommodation in the Spanish capital, they are turning their attention to private aviation. Luxaviation UK has witnessed a surge in requests and bookings ahead of both the Champions League final and the Europa League final between Chelsea and Arsenal, which took place in Baku, Azerbaijan on 29 May.

The business jet operator said it had received more than 350 flight requests for the Spanish capital ahead of this weekend, more than double the normal number of inquiries. Fans desperate to attend the game are going to extreme lengths, shelling out up to £25,000 to charter private planes to transport them there.

With low-fare airlines and hotels hiking their prices up, football fans have resorted to flying privately, “which gives them access to all the timesaving and exclusivity benefits that a commercial airline can’t provide,” says Patrick Margetson-Rushmore, CEO of Luxaviation UK. The charter price of a private jet with Luxaviation UK from London Luton Airport to Madrid, on a Cessna Citation Excel, suitable for up to eight passengers costs approximately £25,000 – equating to around £3,125 per person. When compared with one-way flights costing up to £1,000 and even budget hotels charging similar rates per night, it’s easy to see why the cost and convenience of flying privately starts to appeal.

Adding further to the appeal, Madrid-Barajas Adolfo might be one of Europe’s busiest hubs, but the airport also has a dedicated executive terminal for business and general aviation, so passengers can avoid the queues and delays that might be more likely to arise in the main passenger terminal.

“Major sporting events represent a significant proportion of our business activity each year,” concludes George Galanopoulos, managing director of Luxaviation UK. “We anticipate that certain events are going to be popular with our clients, like the Champions League and Europa League finals, so we ensure that a proportion of our fleet will be available.”

While I’m not quite in the league of chartering a private jet to a major sporting event just yet, if I did have the funds I know which way I’d choose to fly!