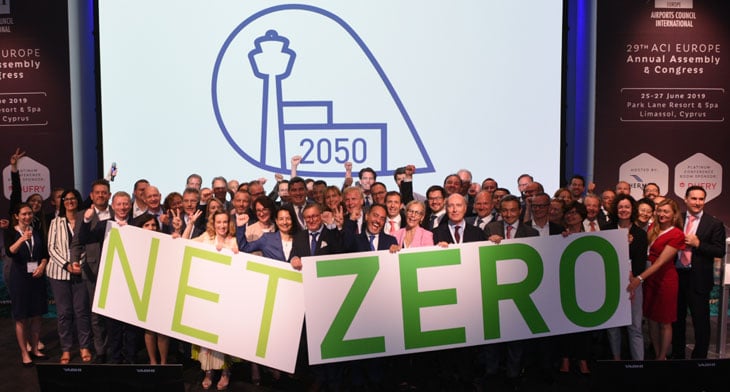 As we near a future with fewer resources and greater demand, creating a sustainable world has become of paramount importance and the aviation sector in particular has a vital role to play in building that sustainable future.

With this in mind, Airports Council International (ACI) Europe has launched the first ever Sustainability Strategy for the airport sector during its annual congress, which is being held in Cyprus this week.

The aim of the Strategy is to equip European airports with an industry-wide framework and guidance enabling them to embed sustainability at the core of their business strategy.

While sustainability efforts have traditionally been focused on minimising the environmental impacts of an airport’s operations – which remains critical and requires continued efforts  – there is an increasing awareness that a sole focus on environmental impacts is not sufficient anymore. Airports also need to maximise the added value they provide to society and articulate that value through enhanced engagement and communication with their communities and other stakeholders.

Airports not only provide an essential connectivity service to their communities, but they are also the ambassadors of aviation on the ground, which provides them with opportunity to be role models and encourage transformational changes beyond their own remits. Offering a key interface between a wide range of aviation and non-aviation stakeholders, airports “need to maximise the added value they provide to society – including through enhanced engagement with their communities and other stakeholders,” Jankovec continued.

Of course, the Sustainability Strategy goes hand in hand with the need for airports to continue focusing on the existential challenge of climate change and builds on a decade of work on climate action, which began with the establishment of the independent, institutionally recognised Airport Carbon Accreditation programme in June 2009.

As such this week’s congress in Cyprus has also seen Europe’s airport industry commit to net zero CO2 emissions by 2050. Based on Europe’s airports’ current traffic volumes (2.34 billion passengers in 2018) and estimated carbon footprint, this net zero commitment will eliminate a total of 3.46 million tonnes of annual CO2 emissions as of 2050.

Dr Michael Kerkloh, president of ACI Europe and CEO Munich Airport, revealed he is confident that many of Europe’s airports will reach net zero before 2050. “There are already three net zero airports in Europe: Luleå, Ronneby and Visby – operated by the Swedish airport operator, Swedavia. Swedavia aims to achieve net zero emissions for all its airports including Stockholm-Arlanda by 2020 along with Hamburg airport by 2022 – while Amsterdam-Schiphol, Eindhoven and Copenhagen airports have set this goal for 2030.”

This commitment is particularly significant, however, because it raises the stakes for airport operators. They will no longer have the possibility to purchase offset credits to reach net zero status, which is seen as a temporary measure to address residual emissions. Airports will now need to gradually replace these offsets by in-sector reductions as new decarbonisation technologies and opportunities arise.