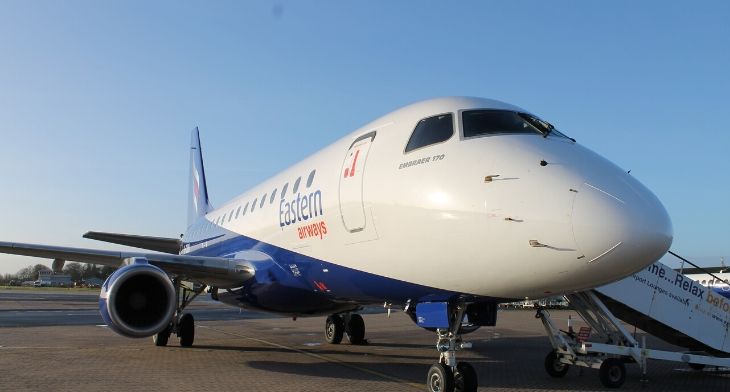 Operating flights from Southampton Airport in the UK, Eastern Airways is re-entering the E-Jet market with the initial return of the Embraer 170 aircraft type to its fleet.

With the UK regional airline seeing significant growth in the ad-hoc charter market for 70-100 seat jets, the first of these aircraft will be delivered later this January.

With a range of over 1,800 miles  the Embraer 170-100 LR jet has a maximum cruise speed of 553mph. It brings routes such as Norwich-Aberdeen within an hour’s flight time, and most European destinations, including the Mediterranean, to a little over two hours.

“We are pleased to see the return of the E-Jets to our fleet giving us an entry into new ad-hoc charter and ACMI markets, alongside an option to evolve our scheduled service network, especially as we expand this fleet through the year,” stated Roger Hage, Eastern Airways’ General Manager Commercial and Operations.

As part of its expanding E-Jet fleet, the regional carrier will also add three of the larger Embraer 190 to facilitate further anticipated growth  by offering expanded larger capacity scheduled and charter opportunities.

Well suited to smaller and more remote airports, both the Embraer 170 and 190 have the ability of offering steep approaches, good short-field performance and long-range operations making them one of the more flexible aircraft in the up to 100-seat market.

Yorkshire and Humber based Eastern Airways was formed in 1997. As well as operating scheduled flights, the airline also specialises in providing customer-focused charter services for the energy industry, corporate and sports contracts and ad-hoc charters.