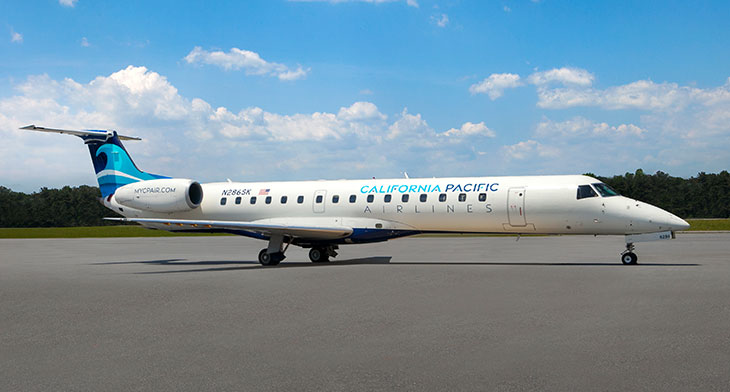 California Pacific Airlines (CPA) has launched its inaugural flights from its California hub – McClellan-Palomar Airport in Carlsbad to San Jose, California and Reno-Lake Tahoe, Nevada. Later this month the airline will also add services to Las Vegas, Nevada and Phoenix-Mesa Gateway in Arizona. The regional carrier hopes to announce additional western routes in the near future.

Commenting on the inaugural flights, Ryan DiVita, director of sales and marketing, CPA said: “We are excited to have officially launched service out of Carsblad’s McClellan-Palomar airport. Our goal is to provide a convenient alternative to San Diego International airport at this under-utilised airport in North Country. There is a demand for air service out of Carlsbad for both business and leisure travel and we aim to serve both markets.”

Operated by Aerodynamics Inc. (ADI), which has a fleet of 50-seat regional jets (Embraer EJ145s), the airline was rebranded as California Pacific Airlines in August, 2018.

Commenting on the new service, Mineta San Jose international Airport’s director of aviation, John Aitken, said: “We are extremely pleased to be one of three launch airports for California Pacific Airlines and the convenient, nonstop service it will offer to travellers between San Diego North County and Silicon Valley.”

He added: “our community will warmly welcome scheduled flights to the Carlsbad, California area, an in-demand destination for both tech and tourism. We appreciate California Pacific’s investment in offering convenience for our local business and leisure travellers.”

Similarly, Phoenix-Mesa Gateway’s executive director, J. Brian O’Neill said his airport was pleased to add California Pacific Arilines to its growing list of domestic and international air carriers. “The Carlsbad/ San Diego area is an extremely popular destination for residents across Greater Phoenix. We are confident that this new nonstop service will be very successful.”

CPA’s EVP and COO, Mickey Bowman, added: “Similar to our base in Carlsbad, the Phoenix-Mesa Gateway airport offers no hassle, easy access to the Valley of the Sun from a fantastic facility in the east suburbs.”