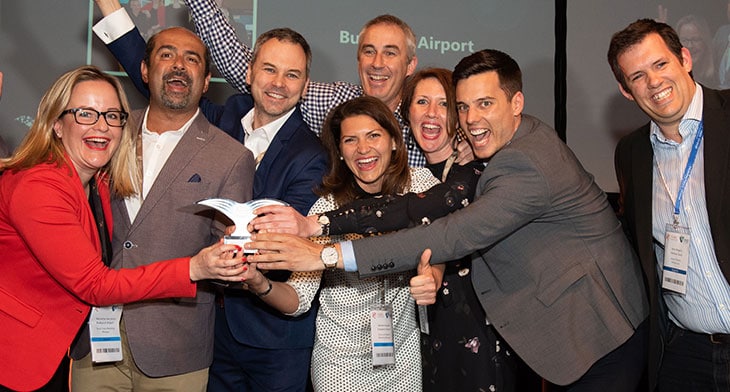 Tuesday 9 April proved a night of celebrations for European airports as they celebrated the winners of the Routes Europe 2019 Marketing Awards.

Having been named the winner of the 4-20 million passenger category, Budapest Airport beat off every European airport to be declared overall winner at the awards ceremony.

“We’re over the moon, and so very proud as a team, to be recognised by the airlines,” exclaimed Kam Jandu, CCO, Budapest Airport, commenting on the airport’s win.

The awards are voted for and judged by airlines and recognise excellence in air service development globally, outstanding marketing service, and the support of new air services as well as the development of existing ones.

Referencing the competition it was up against, which included St Petersburg Pulkovo, London City and Nuremberg, Jandu added: “For us this means the world. It means the airline community – who are the people who matter – voted for my team in a category with so many other outstanding airports. I am very proud.”

He also stated that working as a team has been key to the airport’s success and the relationships it builds with clients are at the core of everything the airport does. “Last year saw us regain our category title for the first time in seven years,” said Jandu. “After some incredibly innovative marketing campaigns, as well as sales activities and forward-thinking, we’ve got everyone talking about Budapest Airport.”

Billund Airport was declared the winner in the under 4 million passengers category, having last year passed the 3.5 million passenger mark for the first time in its history. While the town of Billund itself is too small to support any direct air services, the airport’s marketing strategy has focused on positioning it as the gateway to west Denmark and a catchment area of seven cities.

The airport has invested €6m in incentives to support new routes and capacity increases, with 20 out of 23 scheduled airlines growing their presence in 2018. New destinations added last year include Athens, Bergen, Lisbon, Vienna and Warsaw, while LOT Polish Airlines and Widerøe also commenced service.

Meanwhile Kalamata Airport in Greece was highly commended in this category.

In the over 20 million passenger category, Athens International Airport came out on top, while Vienna Tourist Board took the prize for the destination marketing award.