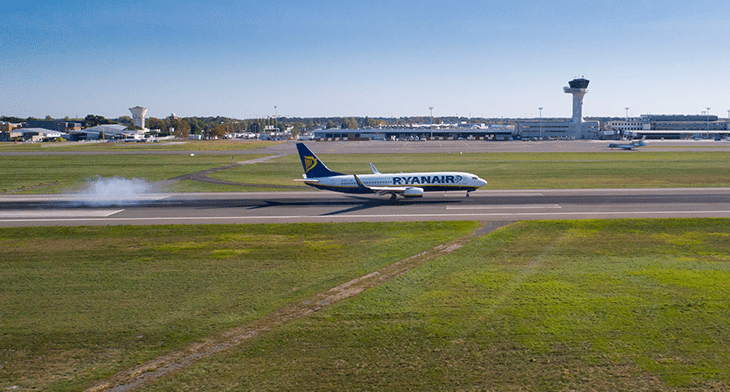 Bordeaux to become new Ryanair base

Ryanair will open a new base at Bordeaux Airport in April, as part of its summer 2019 schedule. The French hub will be the popular Irish carrier’s second French base and will see the delivery of two based aircraft (an investment of over US$200 million).

“Ryanair’s decision to base two aircraft at Bordeaux Airport is excellent news for the airport and for our region,” said Pascal Personne, chairman of the executive board of SA Bordeaux-Mérignac Airport.

“This new base will undeniably increase the appeal of New Aquitaine and represents the opportunity to develop a large number of new destinations. We have been actively working with Ryanair since 2009 and we believe that Ryanair’s potential for growth with the commercial power we know they have, is very important for Bordeaux and is a sign of a long-term commitment.”

With 24 routes (16 of which are new) scheduled for next summer, the airline expects to double its traffic at the airport and deliver 1.1 million customers per annum. Citing his excitement for the new base, Ryanair’s chief commercial officer, David O’Brien said that as well as the additional traffic the new base will “create 60 Ryanair pilot and cabin crew jobs and support 825 airport jobs”. According to Airports Council International research, up to 750 ‘on-site’ jobs are sustained at international airports for every 1 million passengers.