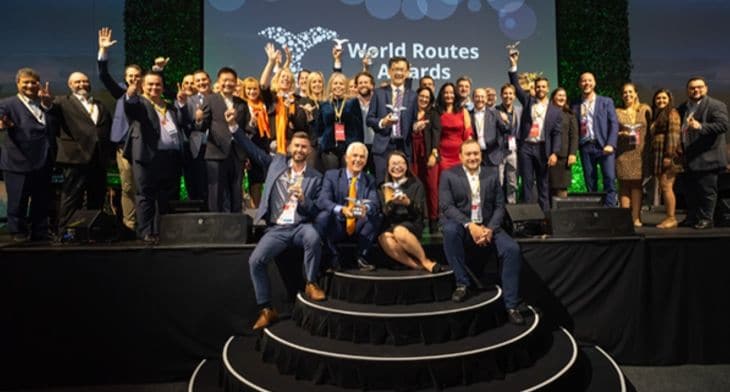 The annual World Routes Awards took place at the Adelaide Convention Centre on Sunday 22 September, in recognition of marketing services that support new and existing air services, as well as excellence and innovation in the route development community.

Billund Airport in Denmark which was featured on Regional Gateway last week for its state-of-the-art hangar design was declared the winner in the Under 4 Million Passengers category. The Danish hub serves as one of the country’s busiest air cargo centres and is located close to Legoland Billund – the largest tourist attraction in Denmark outside Copenhagen.  In 2018, the airport enjoyed its ninth consecutive year of growth passing the 3.5 million passenger mark. New destinations added this year have included Dublin, Faro, Edinburgh and Krakow. The airport’s marketing strategy has focused on positioning it as the gateway to west Denmark and a catchment area of seven cities. It has invested €6m in incentives to support new routes and capacity increases.

Meanwhile, Zagreb Airport in Croatia, which handled 3.34 million passengers in 2018, was highly commended in this category.

Budapest Airport took the top prize at the awards ceremony, as it was named the Overall Winner and also won the 4-20 Million Passenger category. The airport’s passenger numbers have increased by double digits over the last four years, with 2018 recording a rise of 13.5% to 14.9 million. A total of 34 new routes have been announced or started so far in 2019, including the addition of a non-stop service to Shanghai.

Upon being announced as the Overall Winner, Balázs Bogáts, head of commercial analyses and planning, said “Budapest Airport are delighted to have been chosen as being the “BudapEST” airport in the world for airline marketing.”

Malta International Airport was highly commended in this category.

The awards also recognised destinations, with Tourism Ireland taking the win in this category. The organisation experienced its best-ever year for tourist in terms of visitor numbers last year. It also worked on 69 marketing campaigns with 22 carriers, ten airport partners and made a combined investment of more than €7m promoting travel to the Emerald Isle.

The Overcoming Adversity Award was presented to Puerto Rico Tourism Company, which has faced and overcome three unprecedented crises between 2016 and 2017.